The First Taste of a New Series is Delightful: Murder at the Beacon Bakeshop by Darci Hannah

As an outsider looking in, there appeared to be certain cliches associated with cozy mysteries. Up until now, just a few books into what I'm calling Cozy College, I had not encountered any of those cliches. Well, with Murder at the Beacon Bakeshop by Darci Hannah, they are all mostly here, and it started with the book description.

"After catching her celebrity chef fiancé sizzling in the arms of another woman, Lindsey Bakewell left big city Wall Street for small town Beacon Harbor, Michigan, to pursue her own passion as a pastry baker--and gets mixed up in someone's sweet taste of revenge."

The rest of the description is just as puntastic as that opener and it truly sets the stage for what I consider my first traditional cozy mystery. Even John McDougall, the curator of Murder by the Book's Cozy Corner subscription service--in which you get a new cozy mystery per month--comments on the cliches in his write-up. And I'll be honest: before enrolling in Cozy College, I would have rarely picked up this book and, if I had, the description would have made me roll my eyes. Now, however, It made me chuckle and I happily dove into the book.

Lindsey is a pretty fun narrator. She tells the story in first person so you get to hear her inner thoughts as she meets all the characters in Beacon Harbor. She buys an old lighthouse and she and her dog, Wellington, move in and set up shop. Her neighbor is Rory Campbell, a local hunk, ex-military, who is writing a book. The pair meet when Wellington takes a bite out of Rory's caught fish. Sparks ignite and the romantic sub-plot ensues. Betty Vanhoosen is the local realtor who sold the lighthouse to Lindsey yet neglected to mention a certain ghost that may or may not be haunting the lighthouse. Kennedy Kapoor is Lindsey's best friend. Kennedy is an uppity fashion and food blogger with her own podcast who stands out in small town Michigan just like Lindsey did when she moved there. Not only does Kennedy have Lindsey's back, but she also is at odds with Sir Hancelot, her pet name for Rory.

Something struck me as I was reading the chapters in the first section of the book: wasn't this supposed to be a murder mystery? I got lost in all the ins and outs of setting up the bakery and meeting the characters that I actually forgot. Finally, when the death occurs--it's her ex-fiance's new girlfriend who arrived in town to disrupt the bakeshop's opening day--it came out of the blue. (Yes, it's on the back cover description, but I hadn't read it since I started the book. One of my little quirks in reading a story is not to go back to the description time and again while I'm reading the actual book. It helps me with the verisimilitude.) But the dead woman is an outsider. If this book follows the true traditional mystery pattern, there will be more bodies.

I read and watch so many mysteries with professional detectives that I'd forgotten what it was like to have an amateur sleuth be the lead. Absent is Lindsey with a badge, but present is Lindsey with intuition and a nose for asking the right questions. In fact, there is a little taste from the Sherlock Holmes stories here, with a police force slightly behind our lead character. It added a bit of spice to the mix and I enjoyed it.

The resolution I found nicely surprising and satisfying. Perhaps I wasn't reading closely, but it came out of the blue for me. Other readers might pick up on clues better than I did. What I also appreciated was the supporting cast. Another assumption I made about cozies was that they were populated by over-the-top, eccentric characters. In Hannah's book, I didn't find that. Sure there were some character tropes in play--especially with British-accented Kennedy and snobby Betty in the audio version* narrated by Amy Melissa Bentley--but all the folks in this story came across as real people. It was refreshing and fun.

The best thing about the Cozy Corner subscription service via Murder by the Book** is that you don't know what book you're receiving. It's like a birthday present each month. Murder at the Beacon Bakeshop was the February 2021 selection. As I mentioned before, it was a book with a style and a tone I likely would have just passed over earlier in my reading life. Now that I've read it, I happily look forward to the next book in charming series.


*Interestingly, the audio version has a different image for its cover. 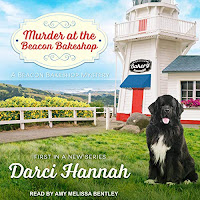 **I highly recommend the Cozy Corner subscription service. It's only $99 (slightly more if you want to have the books shipped to you). There are two other subscription options available. Check the website for details. 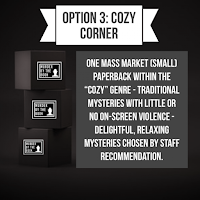