Scout Tafoya on the Films of Tobe Hooper

Scott's Note:  Scout Tafoya is the writer this week, and I'm excited he is.  For the last few years, Scout has been doing some of the best film writing anywhere.  He's written for venues such as The Los Angeles Review of Books and Kinoscope and he's a regular contributor at RogerEbert.com.  His ongoing video essay series on the web, "The Unloved", looks at films that haven't gotten the attention or respect they perhaps deserve.  It's somewhat in the spirit of "The Unloved" that Scout has written a book on the work of filmmaker Tobe Hooper.  There's a lot more to Hooper than the man who made The Texas Chainsaw Massacre, and it's safe to say that no one yet has written anything that takes in Hooper's entire career like Scout's book does.

So, to talk about the book and why he wrote it, here's Scout:

As you age, some of the movies from your youth age with you. And some stay rooted in the exact spot where you first encountered them. They don’t become ideologically complicated, they don’t reveal new things, they don’t communicate anymore about their directors or you, the adult watching a movie to mark a thirty-year anniversary of an event that should mean more to you.

I was fortunate that I had my pick of great art as a kid. My dad, Dennis Tafoya, would publish his first crime novel when I was in college, and together he and my mom, Jill Steelman, watched just about anything, and let it be known to their three kids that they loved art of every stripe. We saw them enjoy everything from Happy Gilmore to Trainspotting, the music of The Gypsy Kings, Tom Waits, Tool, and Enya. High and low culture mixed with abandon, but there was an attempt to get us to understand the difference even if consuming one or the other was never discouraged. When I discovered Italian horror, it came with a warning from my dad about its relative quality. He wasn’t wrong either: it took me something like a full decade to get over my own allergy to the formal considerations and how the best films were defined by a complete embrace of style over plotting.

When I asked them, having heard the name in any of a hundred possible places (maybe in one of the dozen horror movie reference guides that littered our house, maybe as one of a hundred clips chosen for the movie Terror in the Aisles, which I watched more than once back then), if they’d rent The Texas Chain Saw Massacre for me, there was, I recall, a little hemming and hawing before eventual acquiescence. After all, I’d say through Dawn of the Dead, Pumpkinhead, Bram Stoker’s Dracula and Alligator, could this movie, older than all of them, hold anything I hadn’t seen before?  Some weeks later, after finding that neither Blockbuster nor Hollywood video had the VHS of Chain Saw, we drove to the dusty mom and pop video shop in the weird part of our small town and retrieved it. 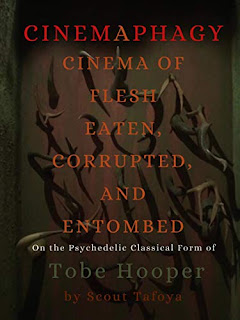 I bragged to all of the neighbor kids I’d be watching it, seduced no doubt by the promise of extreme violence (none of us were strangers to the gory extremes of movies, whether in the flashes of cruelty in Spielberg’s Jurassic Park movies or in the to-us perplexing From Dusk Til Dawn or indeed in the Hooper directed Poltergeist which was just a movie to us - I didn’t know what a director did unless Michael Mann was behind the camera - it took me years to fully GET IT), but when I walked to the bus stop the morning after having seen it, they could see the look on my face was not one of having peeled back the curtain of the adult pleasures of cinema a few inches further. No, I looked confused. Upset. Just what was that movie, with its shrieking hysteria in place of a third act, its sweaty psychological realism, its pathetic, despised cast of characters spoiled by the things I hadn’t yet been taught to expect? It had delivered everything in its lurid title, but I still felt cheated.

Years would pass before a viewing of Alien 3 on television would hook me on the idea of a movie genuinely embracing the randomness of fate not simply as plot but as an ethos. The hopelessness of that movie got stuck in my head like a song with a great verse and no chorus. In high school, my dad got me Joe Bob Briggs’ Profoundly Disturbing and I read the piece on Hooper’s Texas Chain Saw with renewed curiosity and something like pride. I didn’t know half of the grotesque titles the book unpacked, but I’d survived Texas Chain Saw as no more than a boy. Maybe now was the time to learn what I’d missed.

I bought the DVD and the first in a long series of rewatches began. I’d have friends over and we’d watch it again. By the time I graduated high school, I’d probably watched the movie 20 times. An interesting thing then happened, which was as I grew not simply to admire but really to love Texas Chain Saw, I did what I always did with directors I loved (this was right when the Internet was becoming reliable as a replacement for film reference guides) – I went looking for more proof of their genius. I found none.

I’d look up reviews of horror movies to wipe away the hours at either dreadful summer jobs or on train rides to class, and Hooper’s name came up only fitfully. I’d be midway through a review of a film that combined all three Hammer Quatermass movies and then... it was directed by whomst?! Wait wait wait, how did he go from A to B? And how had he fallen so low that his mid-90s Stephen King adaptation was somehow prized beneath the shockingly dull likes of The Stand, The Green Mile, and The Langoliers? I guess he hit rock bottom somewhere in there. I’d turn on the Sci-Fi channel sleeplessly in the middle of the night and there would be Mortuary, beautiful and upsetting but looking...well normal and good. Like a regular horror movie! How...? What...? Just what the hell goes on here?

I remembered the Masters of Horror series on Showtime clear as day, and there was an odd tension there as well. Hooper had been invited, good, sure, checks out, but everyone seemed to agree his were the worst? What? How? I felt like I’d woken up in a "Sound of Thunder"-style selectively reimagined alternate history where the director of the best horror film of all time was regarded as some bottom-feeding hack who lost his touch whenever he stepped too far from the warm glow of Texas Chain Saw’s reputation. What bothered me was that every time I tucked into these supposed banquets of bad choices and failing instincts, I saw the same guy who directed Texas Chain Saw, a movie that hadn’t stopped growing and indeed started to look more and more like Citizen Kane to me in that it subsumed the whole 20th century and then doomed its genius creator to a life in its shadow. Lifeforce? His Quatermass compendium? One of the most gorgeous and narratively expedient genre films of the Bush 1980s, teeming with classy elements (a first-rate cast of British stage talent, a score by none other than Henry Mancini!) brought low by Hooper’s fearlessness before the trashy source novel. Those masters of horror movies? Sweltering navigations of curdled counter cultural instincts that had led to 20 years of grandstanding rotting corpse republican governance turning the world undead as it rode glittering military tech to ticker tape parades. As in Mortuary, Hooper saw the GOP infecting the people, the land, the sky, everything it touched with its “good old days”.  Rhetoric of a return to norms while the flesh was melted off the bones of their opponents – foreign policy at least as old as the Vietnam war he none too subtly opposes in both Eggshells, his study of a Texas commune, and The Song is Love, his concert doc featuring a show stopping performance from the unlikely likes of Peter, Paul, and Mary. Like Hooper they too stuffed their classic-leaning art with a bitter anger at the status quo. And The Mangler? The first viewing I saw a gorgeously overwrought failure tangled in bad prose trying nevertheless to say something about capitalism. The second viewing I saw a modern Max Ophuls forgoing realism for an exploded tour of genre’s response to warfare through mechanized sensation. The third viewing I had a new favorite movie.

I pitched the Hooper book to a fledgling critical press that had already published work by writers I love like Tina Hassannia, but they were out of business by the time Hooper died. I took the chapter on The Mangler and adapted it to make a video essay to eulogize him on www.rogerebert.com, but it still felt like a profound sadness that I kept aging with these movies and would never be able to tell the world what I saw in them. I wanted Hooper to have a permanent place on bookshelves in libraries and universities the world over. He meant that much to me. And every rejection from every publisher I asked (I lost count, but it was at least 30) just felt again like the culture was trying to bury him so deep no one could ever find him let alone re-examine a career filled with dreadful reviews and disappointing box office returns. Hooper died with his career in a bad place, and as with Welles, it felt like people wanted it to stay there.

And then when Covid happened I was talking to my friend Nell Minow about the movie Two for the Road, and at the end of our conversation, she mentioned in passing that she ran a publishing firm and did I maybe want to write a book during quarantine? As it happened...I already had one. Thankfully, in the interim, the rest of Hooper’s work that I hadn’t been able to see when first writing the book had found its way online, and I was able to add to the book and make it a much more thorough portrait of his artistry. I still can’t believe it finally happened and I’ve got a copy sitting a few feet away from me. It will, if nothing else, always be the first book I wrote and fought hard for years to publish. The kid who saw Texas Chain Saw is still in there somewhere, obstinate and proud, trying to explain to everyone at the bus stop what he’d seen the night before. The differences are many, and now I know exactly what I saw: one of the great works of art by one of the great American films artists, one of a few dozen and yet unlike anything else ever made.

You can get Cinemaphagy: On the Psychedelic Classical Form of Tobe Hooper right here.

Posted by scott adlerberg at 6:30 AM