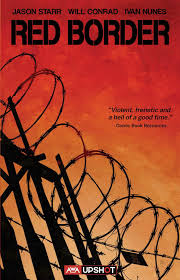 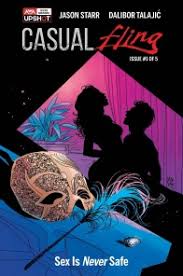 Speaking of films, if horror, at least in part, was an inspiration for Red Border, that unholy thing known as the erotic thriller seems to be the inspiration for your newest comic, also from AWA, Casual Fling.  The first issue came out a week or two ago, and the next one very soon.  Part one sets us straightaway in contemporary Manhattan, and there's a subtitle that says "Sex is Never Safe".  Hmnn. How did this one come about?
Casual Fling is an erotic thriller, with a Fatal Attraction vibe.  It’s probably more similar to one of my novels than to any previous comic I’ve written—not just because it’s set in New York, but because it’s a thriller about one bad decision that Jennifer, the heroine of the comic, makes that has dire consequences for her and her family. It’s sort of story that isn’t told very often in comics and the art from Dalibor Talajić really takes it to a whole other level.
So far it's very New York, and quite funny.  Anytime a man and a woman with sexual chemistry heating up between them talk at a ritzy bar about Milan Kundera and Oxford commas, it's hard not to chuckle, though it all, for a certain strata of Manhattan people, rings totally true. I'm eager to see where this will go.
All I will say is that there's a very big modern twist on the genre.
I'd expect nothing less.  And next, if I can ask, what's coming?  Another novel or a new comic?
I have a new novel, Curved Glass, coming out in June. It’s another departure for me—an alternate reality noir thriller. I’m biased, but I think it could be the best book I’ve written and it’s available for pre-order on Amazon.
If you go here, you can get Red Border.
You can go here for Casual Fling.
And you can go here to pre-order Curved Glass.
Posted by scott adlerberg at 3:00 AM