While I await the epic fight that I'm sure we'll see in the coming Godzilla vs. Kong (which I hope I like as much as I liked the old King Kong vs. Godzilla as a child), I am thinking of the battle I saw presented when I watched I Care a Lot the other night. 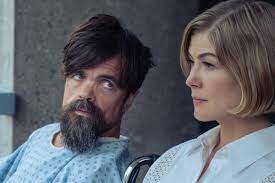 There's Rosamund Pike as the "lioness" Marla Grayson, who works the system to get court-appointed guardianship over helpless and affluent retirees so that she can get them consigned to assisted-living facilities and strip them of all their assets.  Not admirable, but she does what she does with such sociopathic skill and ferocity, not to mention sheer ballsiness, that you can't help but be impressed by her.  She has had a successful run for quite some time, apparently, and lives a stylish and comfortable life with her partner both professional and personal, Fran (played by Elisa Gonzalez).  With the unwitting aid of a clueless judge and the purposeful help from people in this world -- a doctor willing to make false diagnoses of dementia, an assisted living facility chief who aids Marla in isolating the unwitting seniors sent his way -- Marla has everything in place to keep accruing the wealth she is so keen on accumulating.  But then she works her scam on a woman named Jennifer, Dianne Wiest, and this particular elderly woman not only has all her faculties, but is not as alone in the world as Marla and her cohorts, despite their research into Jennifer's past, thought. Jennifer has a connection to a person who turns out to be a Russian gangster, and this gangster, in the person of Peter Dinklage, is as ruthless as Marla, as determined to "win" as Marla is.

I can't remember the last time I saw a gleefully nasty black comedy, but I Care a Lot is certainly one.  Do you enjoy a movie that pits one cold and unscrupulous person against an icy, albeit thoughtful, gangster?  If you do, you should like this.  And you can never go wrong with Dianne Wiest, whose character for a good stretch knows more than Marla does and whose secretive chuckle makes you chuckle with her.

In Gone Girl, Rosamund Pike was totally committed to her character, and that movie played much more as a dark comedy on marriage than any sort of mystery or thriller.  Once again, in I Care a Lot, she's pitch-perfect, and as I watched, I was thinking how this kind of person is in some ways more unsettling than the proverbial tv and film serial killer. There are more people like Marla floating around the world, working their grifts and harming people, than serial killers.  And I won't give away the end, but let's just say that overall the film follows its basic premise through to its logical conclusion.  The Marlas of the world and the outwardly respectable gangsters of the world are doing quite well these days, and there are plenty of media venues for them, with their gleaming smiles, to talk up and promote their businesses. We are doing the planet a world of good, they say, and their media enablers nod approvingly.

Hard not to like a film that leaves you both laughing and with a slightly bitter taste in your mouth.

Posted by scott adlerberg at 9:21 AM