The Great Texas Freeze-Out of 2021

Well, that was something.

As a native Houstonian, I used to look north at winter with a sense of missing out. Look, they had snow. That all changed when I spent a semester in grad school back in 1996 in Kent State University in northeast Ohio. I got a taste of winter and a new understanding came over me: I was not, in fact, missing out on anything. Don't get me wrong: snow for skiing is still awesome. But I was done with cold weather, and I vowed, as I crossed back into Texas that summer never to complain about the heat again.

And I haven't. Partway through this week, I told my son I can't wait for August in Texas.

Winters here in Houston are relatively mild most of the time. I kept my Ohio winter jacket but rarely need it. A few years ago, we literally got winter for a weekend. A big cold snap that killed plants but we were back to our normal Houston winter the following week. No problem.

But this week was a problem. For me and my family and millions of others.

This past weekend was normal. My wife and I watched some television on Sunday night before she retired to bed. My son returned from his job and ventured into his room to watch some anime and YouTube. I had Presidents' Day off so I stayed up later than usual. I channel surfed before falling asleep on the couch, a rarity for me. So tired was I that not only did I fall asleep in my clothes but I didn't plug in my iPhone.

Two hours after midnight on Monday morning, the sleet arrived and the power blipped out. As a resident of the fourth largest city in the country, when our power goes out, it's usually back on in minutes or less. As a preemptive measure, I lit the gas fireplace. I didn't turn it off until Wednesday night when our power was restored. Fifty-eight hours in case you were wondering.

Monday and Tuesday were the worst, with Monday night the coldest weather I've endured since Ohio. But at least in Ohio we had power and heaters. For two days, during the worst cold to hit the city in thirty years--some say over a century--there was no power in the house.

Our house is U-shaped. On one end was the TV room. That's where the fireplace is. It faces north which, during hurricane season (they come from the south) is a good thing. No so much for winter weather. We put sheets over the back glass door and the short front hallway. We closed the hall door to the back of the house. When we had to let our dogs out, I used the back game room as the 'airlock.' Every door in the house was opened and closed. We could literally feel the temperature drop as we went into each room.

We stocked our essential refrigerator food into the ice chest and took it outside. Ditto for the frozen food. The irony there was that we needed simply to leave it outside. It was cold enough. We brought in the sleeping bags and the air mattress that we discovered held no air into the main room and hunkered down.

Fearing burst water pipes, we preemptively turned off the water at the house. As of yesterday morning, we still hadn't turned it back on. We wanted Friday's sun and another day's worth of home heating to warm the pipes and pray they didn't burst. For the bathroom facilities, yes, we harvested snow for the bathtub. My dad--who grew up in Tyler, Texas, and dealt with spotty electricity as something that happened frequently enough that they had lanterns around the house--reminded me of the rhyme about hygiene without water: "If it's yellow, let it mellow. If it's brown, flush it down."

The clothes I fell asleep in back on Sunday consisted of jeans, undershirt, button down shirt, and a wool sweater. Monday morning, I added a knit sweater and a hoodie. For my head, I put on a stocking cap. In the house. Despite the gas fireplace (and gas stove), the temperature continued to drop. The lowest it got in that room, with three people, two dogs, and a cat, was 39 degrees.

With no power to charge our phones, my boy and I went out to my car, which is now the oldest of the three cars and gets to spend its time in the driveway. Lucky for us. I had filled the tank and the boy and I sat for hours, charging phones, listening to classic rock radio, and getting warm. The wife opted to stay inside with the dogs and the fireplace, layered up, and read or played Plants vs. Zombies.

Driving around on Monday with the snow and ice on the roads, some of my old Ohio skills returned. I used it as a teaching experience. We found a Walgreens open and bought some more batteries, a trio of flashlights, and some ground coffee. I buy coffee beans and grind them myself, but without power, those beans are as good as useless.

There's something to be said for being a parent and not being able to keep your child warm. Sure, he's nineteen, but there's still that part of you that knows your child will go to bed cold and there's nothing you can do about it other than offer him more blankets. Ditto for your wife.

With no other distractions, it is amazing how long an hour can feel. Then a day, and then another day. Cell service was spotty so we'd get our news in fits and starts. We brought in an old battery powered jam box on Tuesday evening--hard to remember where it was--and we three settled into a pleasant waiting experience. Sure, it was fifty-something in the house, but you'd be amazed how warm that felt.

Wednesday around lunchtime as the boy and I were in line for gas the wife called. The power had blipped off/on/off and then it came on. We drove to a battery store and called my parents. They had lost power, too, but it had come back on. The boy and I feared we'd get the call from the wife that the power had gone off again, but, by the time we got home, it was still on. And it stayed on the rest of the week.

Yet we still operated like we had no power. We were asked to conserve and ratio power so we did. We finally turned off the gas fireplace to conserve natural gas for others. We only used a single lamp in the TV room and didn't turn on the TV. We still used flashlights to get around the house, including when taking the dogs out. We repeated the exercise Thursday night, but did turn on the TV for news and escape.

Speaking of escape, I got to thank my Kindle yet again. With its light feature and a lot of time to kill, I read Open and Shut by David Rosenfelt most of the way through.

It's Friday morning as I write this. The sun is shining and I hear the sound of a chainsaw down the street. Sure, I'm still wearing three layers in the house and the thermostat shows 63 in the house--more shared conservation--but I'm hoping today will be the first normal day since Sunday. I'm looking forward to turning the water back on. Sure, we'll have to boil our water, but we'll have running water in the house. Which means we won't have to worry about mellow yellow in the toilet. Which means a shower, a luxury we've not experienced since Sunday. Had a short laugh on Wednesday night when I finally changed out of those Sunday clothes and into fresh PJs and caught a whiff of the body odor the five layers were masking.

There will be investigations, accusations, blame, and accountability in the months to come. Our legislature is in session this spring so I hope something will be done to ensure something as severe as the Presidents' Day Ice Storm of 2021 doesn't happen again. Well, we can't prevent Mother Nature from doing this again, but we sure as hell can prepare better.

This was my story as my family experienced it. We're going to learn a whole lot more as we get some distance. Many of those stories will be heart-wrenching and anger inducing and deservedly so. But there will also be stories of shared sacrifice people coming to each others' aid. Let's be sure to listen to them both, commiserate with those who have suffered and celebrate with those who came through.

My family and I came through. Ain't gonna lie: it was hard but manageable. I consider us blessed to have persevered as smoothly as we did. Other did not. Let's keep them in our prayers and figure out ways to help them now and prepare us all for the next time. Because if we're talking Mother Nature, there will be a next time.

It also made us very aware of just how much electricity we use. As the boy and I drove around the west side of town on Thursday night, much of the power was back on. Office buildings and parking garages were lit up with abandon. So were various commercial places. It was a lot of power at a time we are supposed to conserve. We can't do much about those places, but already we are ensuring all lights and nonessential appliances in our house are turned off. It's a lesson we've certainly learned and will carry forward, thankful for what we have. 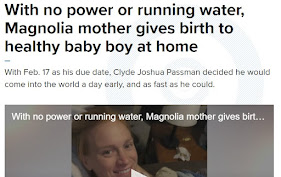 But I also want to leave you with this wonderful story: the family who welcomed their newborn son into the world while stuck at home without power or water. Wow.

Update: The pipes held although the water flow in a couple of the sinks have low flow. We think it is the rust of the pipes that have settled and now is clogging those little filters at the faucet. We'll have to fix that this weekend.

Update 2: As of Friday evening, the house was more or less back to normal. We still have pots in the kitchen full of clean, pre-storm water to drink. But it's a little surreal to walk through the house again, the sheets having been taken down and the sleeping bags back in the garage. It's good to be back to normal. May it last a long, long time.

Your awareness about conserving electricity is a significant outcome to a hellish experience. I’m glad you fared as well as you did.