“And here in my ninth decade, I am a woman who, at long last, has something meaningful to say.”
–Cicely Tyson 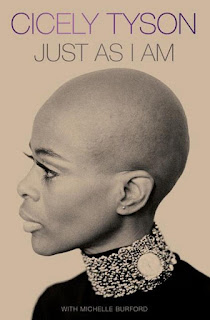 JUST AS I AM
by Cicely Tyson
Cicely Tyson passed away January 28 at the age of 96, just two days after the publication of her first memoir, JUST AS I AM.

This remarkable and beautifully written account reveals to the reader the full and epic life of Ms. Tyson before and during her fame and the often turbulent, historical times that played backdrop. Written with Michelle Burford, who has also worked with Alicia Keys, Toni Braxton, Diane Guerrero, Olympic gymnast Simone Biles, and Paralympian Amy Purdy, the book is divided into three parts, each telling the legendary actor’s amazing story. Planted. Rooted. Bountiful.

Early on Ms. Tyson faced challenges. Born to West Indian parents, racism and hatred were typical elements in her young life. Her home life was often filled with fighting and she had a difficult relationship with her mother. Eventually, her parents divorced. Then, at the age of 17, before she could graduate high school, she became pregnant. Forced to marry the father, after two years they  divorced, and Ms. Tyson became a single mom. Though she had big dreams and a love of the arts she took jobs in offices and typing pools. It was while working downtown for the Red Cross that she was discovered. This chance meeting brought her to her first role and gave us all a great gift.

JUST AS I AM is a graceful telling of Ms. Tyson’s personal and professional life. Although she is one of the most famous actors of our time, only now, with this memoir, do we learn intimate details she had previously kept private: the abuse her mother endured from her father, the lack of meaningful and equal payment for some of the most iconic roles in movie history; SOUNDER, THE AUTOBIOGRAPHY of MISS JANE PITMAN and ROOTS. We read about her delicate and fiercely protected relationship with her daughter and her rocky but resolute relationship with Miles Davis. The life she lived was filled with hard work and hardships, and made all the more poignant by the racism and sexism she endured and survived.

Cicely Tyson’s life was epic and historical. She received an honorary Academy Award, three Emmy Awards, eight NAACP Image Awards, a BAFTA and a Tony Award. She was a Kennedy Center Honoree in 2015 and was awarded the Presidential Medal of Freedom by Barack Obama in 2016.

Ms. Tyson leaves a large legacy, one filled with momentous roles, great loves, and stellar examples of perseverance and determination. And though this memoir is personal and candid, it is also revelatory of a much bigger picture; for Cicely Tyson’s story personifies the difficult life all women of color face and shines as an illustration of the bravery and fight they find or create within themselves to simply live their lives.
Posted by Marietta Miles at 8:25 AM