It is no exaggeration to say that I've been meaning to read Jerzy Kosinski Steps for decades. Somehow, though, I've never gotten around to it.  I read The Painted Bird (1965) many years ago and was suitably impressed, and I remember Kosinski well from the 70s and 80s.  During those years he was twice president of the American chapter of P.E.N, and his books were easy to find in bookstores.  How different those times were, when a writer like Kosinski appeared on The Tonight Show many times and later on Late Night with David Letterman, where, as I remember, he was quite amusing.  I loved the film version of his novel Being There (1979), which he did the screenplay for, and he provided a bracing, acerbic presence playing the Old Bolshevik Grigory Zinoviev in Warren Beatty's Reds (1981).

Then came what you might call the downfall.  There were the allegations of plagiarism in his work, the claims that editors more proficient than him in English had written or re-written substantial portions of his books. There was the charge that The Painted Bird was not autobiographical, which, at one point, he had suggested at least to the world at large.  Though he was acclaimed for The Painted Bird, which was his debut novel, and a National Book Award winner for Steps (1968), some in the literary world accused him of being a con man and literary fraudster.  In the mid to late eighties, physical infirmities set in, and depressed about these as well as the tarnishing of his reputation, Kosinski, in 1991, at his apartment in New York City, committed suicide. He took a large amount of booze and pills and tied a plastic bag over his head, and then died of suffocation.  His note: "I am going to put myself to sleep now for a bit longer than usual.  Call it Eternity." 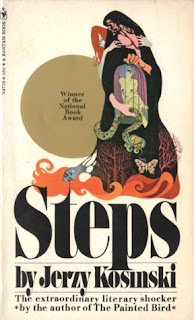 That was all long ago now, and with the turmoil and controversy gone, things of the past, what's left are the actual books. Most people today who pick up a Kosinski novel would probably not know offhand about the charges once leveled at his work.  I've always felt that it doesn't matter one iota whether The Painted Bird is autobiographical or not; it's a highly controlled and disturbing look at one character's survival in Eastern Europe during World War II, and whether or not it happened precisely as written to Kosinski himself is immaterial.
While Kozinski's later novels (he wrote nine in total) may not stand up as well now as his first few do, Steps has only grown in stature.  In its dark once upon a time somewhere in the world tone, it does have a timeless quality. And it got a boost years back when David Foster Wallace listed it in a Salon piece among his Five Direly Underappreciated U.S. novels > 1960.  In Wallace's words: Steps is "a collection of unbelievably creepy little allegorical tableaux done in a terse elegant voice that's like nothing else anywhere ever.  Only Kafka's fragments get anywhere close to where Kosinski goes in this book..." 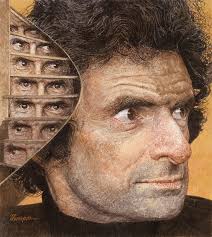 I'm about halfway through the novel and I find it riveting.  Wallace's description of how it is structured is accurate.  The prose is indeed spare and very precise, detached in describing a series of interrelated, dreamlike events.  The narrator (or series of narrators?) is an unnamed man in each instance, his stoicism in the face of whatever comes his way unsettling.  Power, manipulation, sexuality, human cruelty, shifting morality come under an unwavering microscopic.  I'm making my way through it slowly, savoring the tableaux, and it's a great reminder of how you can construct a novel without plot and character as they are defined in the usual sense.  If a novel has internal tension from scene to scene, a compelling vision, as Steps does, and it's as well written as this book is, I'm hooked.
Before I end this, it's worth sharing a story about Kosinski's book, not unknown but still worth telling for those who may not know it.  Whether it's disheartening or not will depend on individual reaction, but there's no denying it's grimly funny:
In 1975, a writer named Chuck Ross set out to prove a theory he held about unknown authors and the big publishers.  He had written a mystery novel that had been rejected everywhere he sent it.  As an experiment, he sent excerpts of Steps (a 1968 National Book Award winner for fiction, don't forget) to four different publishers.  He presented the excerpts as if he had written them.  All four rejected the sample.  Two years later, he mailed the entire book, copied word for word but without a title attached to it, to ten publishers.  The publishers included Random House, which had originally published the book nine years earlier.  He also sent it to thirteen agents.  Every single one of the publishers and agents rejected the book, and none of them even recognized it as an award winner from a bestselling author.  Whether they were embarrassed or not when Ross revealed the fraud, I don't know, though I tend to doubt it.
I imagine that Kosinski (this is before the days he had to fight his own plagiarism allegations) chuckled.

Posted by scott adlerberg at 10:38 AM