Anyone who's seen Douglas Sirk's 1959 film Imitation of Life knows that it has one of the greatest closing sequences in movie history.  In the story, the black character Annie has spent the entire movie, it seems, caring for and looking after her employer, the white actress named Lora, as well as Lora's daughter, Susie.  Annie has a daughter of her own, Sarah Jane, and these two have their own problems, as Sarah Jane, much lighter-skinned than her mother, tries to, and successfully does, pass for white, a move that causes her mother much grief.  Throughout the story, Annie serves as the embattled, and rejected, mother of Sarah Jane, the surrogate mother to Susie, and the nanny, maid, trusted confidante, and even the closest friend to Annie.  In other words, complex and full of depth as she is, Annie seems to have no life apart from what we see of her in her interactions with these other three characters. And in truth, she has enough work to do and crises to manage dealing with the high maintenance issues of the other three.  When Annie dies at the end, in true tearjerker style, with Lora sobbing at her side, we assume that Annie will get a proper burial, but what she does actually get is something huge and sumptuous, a magnificent funeral, with hundreds of people, black people, in attendance.  Who are these people?  We can only surmise that during her life Annie had a full and rich existence outside her life as a housekeeper, mother, and confidante to a white woman, and that this funeral is evidence of that life.  She had friends, a social world, an entire existence we were not at all aware of because the film gave us no indication of it. In certain ways, the ending undercuts everything in the story you've seen before and implicates the audience in assuming something about Annie we had no right to assume.  Yes, she had all that stuff going on that we knew of, but she also had a life of her own and, quite clearly, the love and respect of many many people we didn’t know about.  Damn, you think, that movie was great, the ending was remarkable, and now I'd love to see a film about the "other" life Annie had. That life, you assume, probably had a lot less drama than the part of her life we saw, with social activities and friendships and laughter and ordinary give and take with other people, except it was in the black community.  A ton of stuff must have happened in her life, offscreen.

Cut to late 2020, and we have the appearance of Sylvie's Love, on Amazon, a melodrama in the Douglas Sirkian mode that puts center screen the type of black characters once relegated to its fringes.  I don't often find myself recommending love story movies to the people in my house, but that is precisely what I did with this film, which dares eschew any snarkiness or easy irony in its portrayal of a late 1950s early 1960s romance between two young people in New York City, an ambitious woman from a solid middle-class home (Tessa Thompson) and a jazz musician with lots of talent but little money in his pocket (Nnamdi Asomugha). 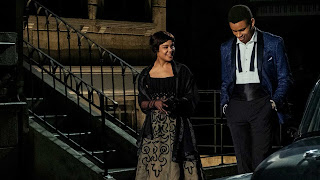 Douglas Sirk has been redone, so to speak, before.  Todd Haynes did it with Far From Heaven and Carol, and the great directors Rainer Werner Fassbinder and Pedro Almodovar have put Sirkian aesthetics to their own specific uses in a number of their films. Sylvie's Love takes lush color, artfully designed sets, undisguised emotion, and class differences and puts them at the service of a story that has an old Hollywood feel yet feels fresh because it looks at a world, Harlem-based, that we haven't seen in quite this way before. The director, Eugene Ashe, has said that photographs of his family from the 1950s, pictures showing his family happy, helped inspire him to make the film.  He wanted to make a film revealing the lives behind these photos.  As he says, "I wanted to make a film where Black people of the era don't exist through adversity but through love."

It's a simple sentiment, but when you think about it, you realize how rare it is, even now, that you see a film where duress and conflict with the world, at some level, is not the focal point of a black-centered story.  Not that adversity stories don't reflect reality, but there is more to life than this. 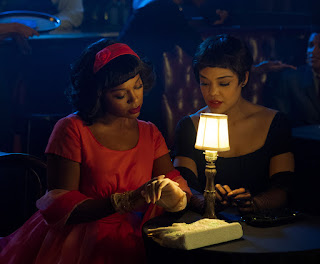 Sylvie's Love doesn't ignore what's going on in the world at the time of its tale; it just does not make the typically depicted struggles its focus.  Bigotry and racism exist of course, but Sylvie and Robert (the musician) as well as Sylvie's husband deal with it and continue to live their lives without being consumed by such toxicity.  The Civil Rights marches are going on, but we are aware of these only through glimpses of the marches on television and phone calls to Sylvie from her best friend, who is down in the South taking part in them.  There is also the change going on in gender roles, and Sylvie is in the thick of this, getting a job in television and having to find a way to balance her working life and her own ambitions with her domestic life and the demands of her successful but traditionally-minded husband.  Much goes on in the story, but as one excellent review I read put it, by critic Tomris Laffly on the RogerEbert.com site, "Ashe keeps his lens tight on the normalcy of the epoch’s everyday life, a luxury that’s formerly been almost exclusively afforded to white-centric stories of the period."

An old-fashioned tale can be made into something new, and straight melodrama, when done well, can provide a satisfying experience.  I found both things to be true with Sylvie's Love.

Posted by scott adlerberg at 9:33 AM