History Through the Thin Man Movies 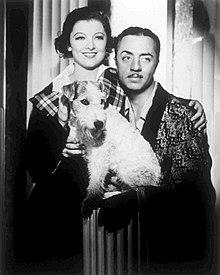 In that magical week between Christmas and New Year’s Day when, if you have the week off you can forget which day of the week it is, I finally did something I’ve wanted to do for a long time: Watch all six Thin Man movies.

For a gift, I was given the box set with all six movies and a seventh disc with documentaries on stars William Powell and Myrna Loy. I watched a movie per day from 26 to 31 December, writing a review per day. I had seen the first two more than once, but movies three through six was brand new to me.

For the record and to make my point, here are the movies and release dates (with links to my reviews, if you are interested):

Three films debuted in the 1930s. The first in May 1934, a mere five months after the book’s publication. Christmas Day 1936 saw the release of the second film while it was Thanksgiving 1939 for the third. The fourth came out in November 1941, a mere three weeks before the Pearl Harbor attacks propelled America into World War II. The fifth film was released in January 1945 when the end of the war was in sight while the last landed in theaters August 1947, two full years after the V-J Day.

In watching them in a row, it was fascinating to watch history progress through the films.

If you know anything about these films, you probably know the witty banter between the two leads and the copious amounts of alcohol consumed. But modern viewers may forget that The Thin Man arrived in theaters a mere six months after the repeal of Prohibition. Sure, there may have been a lot of drinking on the down low during the 1920s, but I suspect a large percentage of the viewing audience adhered to the Volstead Act (enacted in 1920, thirteen years ago for folks in 1934) rather than risk arrest. Thus, to see Nick and Nora Charles throw back martinis one after the other must have seemed edgy. But, I suspect, more than a few watched this movie and then headed out to a bar with the full knowledge they were allowed to drink again.

Interestingly, as the movies progressed, the Thin Man series became more family friendly. Sure they could drink as much as they wanted, but it was nowhere near the amount from 1934. Heck, by the fifth film, Nick was trying to go sober and drink apple cider. Does every long-term franchise gradually sand away the sharp edges that were hallmarks of earlier movies?

Speaking of edgy things, in the first two films, Nick and Nora not only trade witty banter back and forth, but there is a definite marital/sexual chemistry that’s palpable on screen. The latter four, however, soften up the couple, making them more palatable for a broader audience.

The films’ depiction of women can seem irritating to 21st Century viewers. If you always think of Nick and Nora as a team solving crimes, that’s not really the case for the first four or five. It’s only in the last film where Nora is an active participant in things other than the finale. In fact, Nick has a really irritating habit of ditching Nora as often as possible. Even in front of her face, he’ll chastise her like she’s a kid if there are other men around. By the final film, after women held down the home front as Rosie the Riveters, the depiction of women changed. Nora was almost an equal partner.

The clothes and hairstyles are also a giveaway. You could almost name the film just by looking at a still of Loy or Powell and focusing on their hair. In the latter films, you can tell Powell was dying his hair. Loy’s hair gradually went from high-society ritzy to nearly middle-class.

The Thin Man movies sit squarely in the traditional detective movie mold. Murders are always off screen, next to zero blood, and the detective invites everyone to the same room to give a monologue where the culprit always confesses. It’s a structure that fits these kind of characters. They don’t belong in a hard-boiled noir film and they never enter one, but the world had changed around them. Nick and Nora are rarely in danger in any of the films, but the last one includes a sequence in which they feared their son was kidnapped. Definite damper on the grins and giggles. Since the kinds of books and movies were different after the war, it’s probably a good idea the franchise ended with six films. It’s also good, too, that the sixth was a return to form, because the fifth was a misstep (and my least favorite).

In all, though, I had a blast watching these films. Have you seen them all? What are your favorites?