What’s Your Book About? The Challenge of Book Descriptions

What do you think about book descriptions?

When someone asks us what our book is about, some of us are hamstrung. Having lived with the book for potentially months, we know the ins and outs of the story. Some of us launch into a massively detailed description of the book, the characters, the plots and sub-plots.

You’ve read a lot of book descriptions. I know I have. They either catch you or they don’t. Well, there’s another thing that can sometimes happen: the book description that tells too much. How irritating are those movie trailers that all but show you the entire film? We are all sophisticated viewers (and readers) so I don’t think we need every single beat of a story told in a description.

The reason I’m talking book descriptions is that I’m preparing my next book for publication. It’s called TREASON AT HANFORD: A HARRY TRUMAN MYSTERY. I’ve been re-reading it and making edits and changes most of the summer. I’ve got a cover concept (well, at least five) and I sent it to some of my fellow graphic designers to get their take. One of them came back: what’s the book about?

So I sent the description.

What’s problematic about a book featuring Harry Truman is that most folks know he was president and probably instantly jump to that conclusion when they think of Truman. But my tale takes place the year before he became vice president and then president. So I needed at least a sentence or two to lay the groundwork that I’m referring to Senator Truman and not President Truman.

After a few attempts, here’s what I wrote:

Before he became vice president in 1945, Senator Harry Truman led a congressional committee dedicated to ferreting out corruption during World War II. The investigators of the Truman Committee adhere to a simple credo: help the country win the war and bring our soldiers home.

In the spring of 1944, Truman receives a series of ominous letters from a lawyer out in Hanford, Washington. His client, a common farmer who lost his land when the government confiscated miles of territory for a secret project, has been drafted to keep him quiet about what he’s seen going on around a local warehouse with direct ties to the giant facility in the area.

Fearing the worst, Truman leads the investigation himself, bringing along Carl Hancock, a former policeman. Soon after they start poking around, Truman and Hancock witness a pair of brutally murdered corpses, a town clouded in secrecy, and the warehouse owner who is ready to pull strings and dismiss the pesky senator.

But the man from Independence, Missouri, is tenacious, and in no time, Truman and Hancock not only find themselves embroiled in the top-secret world of the Manhattan Project but also must confront the worst act of treason in American history since Benedict Arnold.

To me, paragraph one sets the stage in the reader’s mind that this is Senator Truman I’m writing about. Paragraph two features the incident that gets Truman’s attention and start the investigation. The third paragraph ups the stakes by throwing in corpses and the world of 1944. And the final paragraph—which could almost be a log line itself—tosses the phrases “Benedict Arnold” and “The Manhattan Project” into the mix, letting the reader know the just how high the stakes are.

I think it’s a good description and should tell potential readers whether or not they’d like the book.

Then there’s the elevator pitch. Maybe it’s the log line, the one-sentence version of the book. Kudos for any creative type who can sum up a work in a sentence. It’s crucial, mind you, but it’s a skill that must be learned if you don’t already have it.

Like I just wrote, the last paragraph of the description could serve as the elevator pitch, but I also have a sentence on the cover: Before Harry Truman dropped the bomb, he had to save it.

I debated whether or not to include ‘A Harry Truman Mystery’ or not as a sub-title and will likely opt not to have it and leave in the cover blurb. Not sure. Still tweaking the cover concept.

What’s the cover look like? Well, you’ll just have to watch a little bit longer.

What are  your thoughts on book descriptions? How do you structure them?

This week, Beau Johnson takes a look at some Christopher Farnsworth. 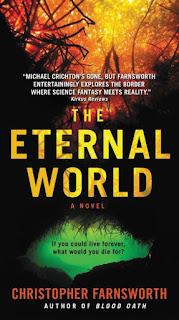 If you could live forever, what would you die for?

Five hundred years ago, a group of Spanish conquistadors searching for gold, led by a young and brilliant commander named Simon De Oliveras, land in the New World. What they find in the sunny and humid swamps of this uncharted land is a treasure far more valuable: the Fountain of Youth. The Spaniards slaughter the Uzita, the Native American tribe who guard the precious waters that will keep the conquistadors young for centuries. But one escapes: Shako, the chief’s fierce and beautiful daughter, who swears to avenge her people—a blood oath that spans more than five centuries. . .

When the source of the fountain is destroyed in our own time, the loss threatens Simon and his men, and the powerful, shadowy empire of wealth and influence they have built. For help, they turn to David Robinton, a scientific prodigy who believes he is on the verge of the greatest medical breakthrough of all time. But as the centuries-old war between Shako and Simon reaches its final stages, David makes a horrifying discovery about his employers and the mysterious and exotic woman he loves. Now, the scientist must decide: is he a pawn in a game of immortals. . . or will he be its only winner?

More here: https://www.harpercollins.com/products/the-eternal-world-christopher-farnsworth
Posted by Steve Weddle at 5:03 PM No comments: Links to this post

Anyone in the mood for a police story with no action and a tense climactic scene that involves three cops in an office debating the meaning of words over a dictionary?  I suggest the 2009 Romanian film Police, Adjective, directed by Corneliu Porumboiu. 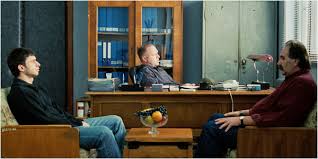 The setting is a city in Romania, the time period post-Communist. A young detective named Cristi is investigating a group of teenagers who have been smoking and selling hashish.  His main focus is one boy in the group, Victor, who another in the group has informed on. Cristi spends a lot of time following Victor, but he believes that the squealer pointed him in Victor's direction primarily because the squealer likes the same girl Victor does and would like Victor out of the way. Besides this, Cristi dislikes the sheer pettiness of Romania's hash and marijuana laws, which, he insists, will soon be changed to match the laws elsewhere in Europe.  In Prague, for example, where he went recently with his wife, people can carry and smoke small amounts of pot in the streets without fear of arrest.  As he continues to tail his main suspect and other members of the teenage hash ring, putting his file together, as ordered, so he can present it to his superiors who are expecting him to lead a major bust on the ring, he becomes more and more resistant to the idea of continuing with the case.  Why ruin Victor and the others' lives for such a small offense that will soon not even be on the books?  Not unlike cops you see in far splashier cop movies, he has a crisis of conscience, torn between his own sense of morality and the duty to the state's law he is supposed to uphold. His dilemma puts him at odds with his commander, and that puts his career at risk.

Police, Adjective is a procedural as unglamorous as one can be.  Almost the entire film consists of scenes of Cristi either tailing his suspects or dealing with police bureaucracy.  Scenes of his home life with his wife have no dramatics; he and his wife eat dinner and talk about the meaning of certain lyrics in a song she is listening to on her computer.  Post-Ceausescu Romania is a fairly bleak place and people conduct their lives without flash, in a somewhat subdued manner.  Still, the film is shot through with black humor, an understanding of the absurdities of organizational and bureaucratic life, and the story itself, without any fighting or shoot-outs or loud confrontations, becomes compelling.  Suspense builds.  Will Cristi follow his own conscience (as he himself calls it) or do what his superiors tell him to do and uphold the letter of the law?  And what does conscience mean anyway?

It's Cristi's commander who, when Cristi refuses to go through with the bust on the teenagers, calls for a dictionary, a Romanian dictionary, and we get the extended scene between the commander, Cristi, and a third officer where they discuss and debate the dictionary meanings of a number of words including conscience and law.

"Having a meeting?" the third officer says.

"No," the commander says.  "Dialectics, that's what it's called. Know what that means?"

The last word they look up in the dictionary is police, and there is more than one meaning to be considered.  We tend to think of the word as a noun, but let's not overlook police as an adjective, as in police state.

What will Cristi do? The discussion ends with the commander leaving him a few hours to decide.  Will he make the bust as directed or continue to refuse and probably ruin his career?

No shootouts, no beatings, no chases.  A story that takes its time, and the offense that's investigated is very low-level.  But if you give it a chance and have patience, Police, Adjective gets to you and makes you think about a lot of things.  It is definitely the first movie I've ever seen that employs a dictionary, and indeed hinges on a dictionary, at its climax.  A movie involving crime, investigation, and what words mean and imply -- I would think that's a movie that many writers, and especially crime writers, might very well like.


Posted by scott adlerberg at 9:16 AM No comments: Links to this post