The Mysteries of Chess

I just started watching The Queen's Gambit on Netflix -- I'm one episode in -- but so far it's excellent.  I read Walter Tevis' novel several years ago and loved it, and I've been glad to hear such positive things about the show from everyone posting about it on social media.  It really does tell a fascinating story and have a compelling central character.  Though I would hardly call myself a superlative player, I've liked and played chess since I was a child and have read up quite a bit on the game's history, and that Tevis, who called himself "a class C" player, had studied and acquired lots of knowledge about the game is obvious to any reader.  Among his other novels are The Hustler and The Color of Money, so if there is anyone who knows how to tell a tale based around the drama and tension of games, it's Tevis.  He does it in a way that's riveting in The Queen's Gambit, a novel that's part game/sports story, part psychological thriller, part coming of age novel.  My bet is that anyone who hasn't read the book and loves the series will like the book a lot. 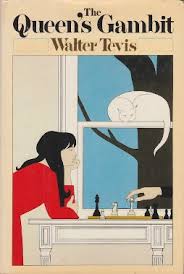 Among chess novels, Tevis' book ranks among the best ever written, and I'd put it among my top three fictional chess stories.  The other two aren't surprising picks by any means, but they're worth noting, nonetheless.

First, The Defense (or The Luzhin Defense, as it's also called), by Vladimir Nabokov.

Nabokov's third novel, first published in Berlin in 1930, is about the life of the title character, Luzhin, and explores the link between genius and madness.  Though he's not an orphan like Beth Harmon, Luzhin has a few similarities with her.  As a child, he's a solitary sort who finds it difficult to connect with people.  Even his parents don't understand him.  He winds up turning to chess as a -- yes -- defense against ordinary life with its attendant anxieties.  And at first he succeeds, rising in the chess world swiftly, but at some point, his obsession with the game becomes all-consuming and works against even how he performs at the board.  No doubt, and unsurprisingly, this theme of obsession is a common one in chess stories, and Nabokov himself describes The Defense as "the story of a chess player who was crushed by his genius".  In part, he based the character on a German chess master he knew, a man who, shall we say, came to an unfortunate end.  As with Tevis, it's obvious Nabokov knows the game well, and anyway, it's a Nabokov novel, so you know it can't not be good. 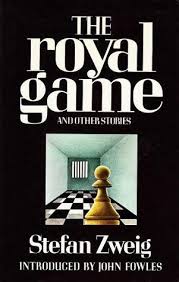 My other favorite chess story is the classic Stefan Zweig novella, The Royal Game (also known as Chess Story).  It was written in 1941, a year before Zweig, an Austrian in exile in Brazil, distraught about the state of the world, committed suicide.  He sent the story off to his publisher a few days before he killed himself, and the novella was published in 1943.
This story, to be honest, is one of my all-time favorite stories of any kind, not just a favorite chess tale.  It's masterfully told by a writer who knew how to weave psychological complexity into tightly plotted and humane tales. Though, again, the story deals with obsession, what's striking about The Royal Game is that chess here, for the most part, serves as something that saves a person's sanity rather than destroys it.  The plot centers around a man who is put in a Nazi prison and kept in isolation.  He feels himself falling into madness, but the one thing that keeps him somewhat sane is a tiny chess book he manages to steal and hide away in his cell.  He memorizes all of the grandmaster level games in the book, every variation of every move in the book, and begins playing games in his head hour and hour, day after day.  Not unlike Beth Harmon as a child in The Queen's Gambit, he plays games on the walls and the ceiling.  The story climaxes after he has gotten out of prison and left Europe and is traveling on an ocean liner going from New York to Buenos Aires.  On the ship, he encounters a number of chess enthusiasts and the person who is the current world chess champion, a man named Czentovic.  They play, and what ensues is a battle told with great psychological insight and suspense.  I've read The Royal Game three or four times and always find myself enjoying it, as well as learning from its pacing and construction. As a sheer chess yarn, which has a subtle but strong emotional heft, this one is hard to beat.
Anyone have other particular chess stories, in fiction, that they like?

Posted by scott adlerberg at 10:54 AM