Stories and People: Overlook the Flaws?

Though the series started several weeks ago, I just started watching Lovecraft Country, and the one episode I watched has me hooked enough to continue watching.  I particularly liked the very first sequence and how it gets right to the heart of how a fiction reader engages with a story they like.

The first scene opens with an African American soldier in a trench in a war battle, fighting among other African-American troops.  The battlefield goes from color to black and white and transforms into a combat zone that involves alien creatures and disc-shaped spaceships on what now appears to be another planet.  There's an odd voiceover talking and somehow Jackie Robinson enters the scene, using a baseball bat to smash his way from inside the body of a tentacled monster. 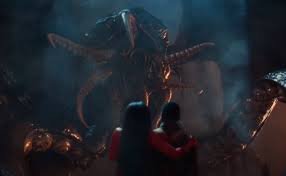 At this point, the scene cuts and a black man, the one we’ve been watching, wakes up on a bus with a book on his lap.  The bus is driving through the countryside somewhere, and the time setting appears to be the 1950s.

A little later in the sequence, a black woman who was on the same bus as the man asks him what book he's reading.  His answer reveals that it's A Princess of Mars, one of Edgar Rice Burroughs' John Carter novels.  So what we've been seeing is a scene where a black reader was reading about white characters, but in his mind, while reading, or while dreaming about the book he's been reading, he made all the characters black.  We've been watching the reading imagination at work, the process by which a person, in this case black, puts themselves into the story they're absorbed by.  This process, of course, is what everyone who likes to read fiction does, each in their own way, but it's unusual to see such a lucid representation of one person literally seeing himself and people like him in fictional characters of a different race. This is all presented quite nonchalantly in the sequence, which is all the better, but it wonderfully captures the sustaining and enhancing quality of fiction.  Stories do give you concrete images to read, but at the same time, you project what you want, and what you emotionally need, onto these images.  Representation is a two-way process, in a sense, made by what the writer has provided but also by what the reader brings to a story.  In about three minutes,  a wonderful succinctness, Lovecraft Country makes this point. 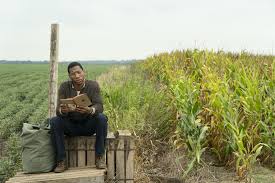 However, the woman questioning the reader latches onto a point he has made in describing A Princess of Mars to her.  He says that John Carter, who becomes a Martian warlord, was once a captain in the army of Northern Virginia.

She says, "Hold on.  You said the hero was a Confederate officer."

Him: "Stories are like people.  Love them doesn't make them perfect. You just try and cherish them, overlook their flaws."

Her: "Yeah, but the flaws are still there."

To which he adds, "But I love pulp stories," and goes on to explain what he loves about them, with all their action and adventures and heroism, and this prompts a smile from the woman who's been probing him.

Dialectics right off the bat!  And in an exchange about a pulp novel.  There's no simple resolution to this exchange, but yet another point has been quickly made -- about the complexity of engaging with stories and people and the imperfections in both.  Just how far do you go in overlooking flaws?  Does it depend what those flaws are?  The exchange alludes as well to H.P. Lovecraft himself, writer of pulp (as it was seen at that time at least) and man of many peculiar hang-ups, among them his well-known views on race.  It's a relevant subject for discussion, to put it mildly, in a time when the eternal debate over how to value art in relation to the artist, and the artist's actions and views, is raging.

Posted by scott adlerberg at 9:17 AM