For the first time in decades, I have found myself returning this year to the locked-room mystery, a particular favorite of mine when I was reading mysteries in my teens.  John Dickson Carr was my favorite Golden Age mystery writer when I was that age, and earlier this year, I re-read and wrote a piece about The Crooked Hinge, one of his best Gideon Fell puzzles.
Maybe it's the year we've had, the mess we're all in.  There's the virus, the political situation, climate catastrophe, the so-often repellent and stultifying discourse on social media.  But the locked-room mystery, perhaps most of all types of mystery stories, represents a wonderful way to escape.  When well-done, they provide a great puzzle that promises an ingenious (though often surprisingly simple) solution.  They provide closure.  They satisfy the mind and soul in a way most traditional mysteries do, but perhaps to a more extreme degree because they are so much about the intricacies of the puzzle itself.  When you read something as complicated and marvelous and flat-out brilliant as Soji Shimada's The Tokyo Zodiac Murders, you are in a world where the most grotesque and impossible crime can actually be solved through reasoning.  Clear vision and lucid thought, put to a worthwhile purpose, win.  What world is this?  Not the one we're living in, obviously.  But therein lies much of the attraction.
To end this summer, I felt myself in the mood for a locked-room novel, but I wanted something on the more modern side.  I thought at once of Adrian McKinty, who I've met and had a swig or two of whisky with at a couple of Noir at the Bars, but who I had never read. I've always really enjoyed his quite entertaining readings at Noir at the Bars, though, and decided to read In the Morning I'll Be Gone, from 2014, the third of his Sean Duffy books. 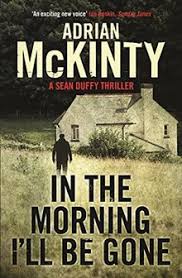 By the way, if you haven't read it, you should read McKinty's list from a few years ago of his favorite locked room novels ever.  It's in a couple of places, including his blog, and you can Google the list easily.
As for In the Morning I'll Be Gone, I found it a perfect end of summer read, satisfying on every level.  I'm sure a lot of people reading this have read it.  But in how it mixes a play fair with the reader locked-room puzzle, a murder in a pub, with its look at the Troubles in Northern Ireland in the 1980s, it was a riveting read.  Classical mystery meets modern-day procedural meets thriller.  What's particularly great is how the locked room case is something Duffy has to solve to get on with the rest of the case he is working on.  He can't proceed to his main goal without solving the pub murder.  I'm trying to think, but I don't recall ever coming across a crime novel structured precisely this way before, and McKinty makes it all click.  That it's also sharply written, with great descriptions of mood and landscape and weather, and quite often funny only add to the pleasure of reading it.  I have to say: I wasn't in the least surprised it's frequently humorous. I expected that from the times I've heard McKinty read.
Anyway, this proved to be just the book I was looking for to end this somewhat frustrating summer, and  now I find myself eager to read more Duffy cases, including Rain Dogs, McKinty's other locked-room (or locked-castle, in this case) novel.
Posted by scott adlerberg at 8:41 AM

Carr is a favorite of mine, too. But I'd put alongside his best a Golden Age gem by Hake Talbot: RIM OF THE PIT.