This week, Beau takes a look at Satan's Sorority by Graham Wynd.

In the fall of 1958 Sandra Delites is packed off to college in Connecticut after an ‘incident’ with another girl.

Her father thinks a small town university will be just the thing to straighten her out, only he hasn’t reckoned on the sisters of Sigma Tau Nu. Not just any sorority, their rites are bloody and the girls are hot – but not for the boys! President Trixie Faust sees a lot of potential in the newest pledge and Sandra is eager to learn: the thrill of the kill is just the beginning for these college girls gone wild.

Halloween will be extra scary this year. Forget black cats--you don’t want one of these sisters to cross your path.

"A refreshing change... For those more learned than me there are plenty of literary and occult references in this story.  Putting a twist on Goethe’s famous character by making it female was interesting and also made the ending more surprising.  I enjoyed the ending, even if it was more of a beginning. Sometimes when I read a book I find a single line sums it up perfectly. The poets often claimed that death wore a mask, but they never said it wore a sorority pin. Not yet anyway."  -Tony Lane 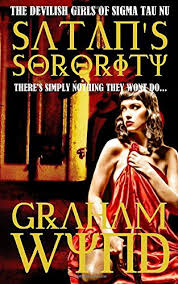