On social media and to friends, I've mentioned how much I like the French writer Patrick Modiano.  He's a master of emotion and mood and mystery, and few, if any, of his thirty-plus novels run as long as 200 pages.  He grew up in post World War II France and had a very unusual relationship with his father, who, during the war and although of Jewish descent, apparently was a Nazi collaborator (Modiano's mother was a Belgian-born Flemish actress).  Modiano himself never seems to have learned precisely what his father did during the war, but it's clear that his father never wore the star Nazis demanded all Jews wear and that he didn't surrender himself when the Paris Jews were rounded up to be taken to concentration camps.  His father spent the war, from what Modiano could gather, making a living on the black market and socializing with Gestapo agents in Paris.  He survived the war unharmed and in sound financial shape.  Modiano's first book, La Place de l'Etoile, is a World War II time novel about a Jewish collaborator, and -- talk about parents not supporting your literary efforts -- when the book appeared, it so upset his father that the man tried to buy up every existing copy.

Shady fathers, aloof fathers, fathers with secrets, fill Modiano's books. He is obsessed with memory and its elusiveness, and in novel after novel, he explores the enigmas of memory.  A good profile of him in the New Yorker, from 2014, describes how he "has returned again and again to the same themes: the pull of the past, the threat of disappearance, the blurring of moral boundaries, 'the dark side of the soul'."  That's an accurate description, though it doesn't convey the sheer pleasure of reading Modiano.  His plots are filled with menace and suspense, and that he loves detective fiction and noirish fiction is obvious from the plots he concocts and the remarkably evocative atmospheres he creates.  He makes you work to piece puzzles together and prefers suggestion and somewhat open-ended resolutions to tidily wrapped up narratives, but of course, when you explore memory and moral ambiguity, not everything can be fully answered. 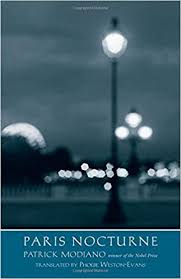 The other day, I finished reading my sixth Modiano book, Paris Nocturne, and I'd say it's a wonderful place to start reading him if you haven't already. It involves a car accident, a weird hospital, a woman who vanishes, ether, a search for the vanished woman, an odd and poignant dream, and much wandering around Paris as a man tries to put together confusing fragments of memory he has. Told in the first person, as all the Modiano books I've read are, it has a distinctly noirish tone mingled with a sweet melancholy.  Much of the story takes place at night, on dark streets, but glimpses of light always seem to be just around the corner.

Well into the book, the narrator mentions remembering "a rainy afternoon in the Latin Quarter, a fellow with a jawline beard in a grey trench coat was handing out leaflets.  It was a questionnaire for a study about young people."

The questionnaire has questions pertaining to family life, and then it asks three questions I found interesting.  I found myself stopping for a moment in my reading to mull the questions over.  The questions, as posed in the book, are these:

1) "Would you prefer to be part of the revolution or contemplate a beautiful landscape?"

2) "Which do you prefer?  The depth of torment or the lightness of happiness?"

3) "Do you want to change your life or rediscover a lost harmony?"

2) "The lightness of happiness."

In responding to question three, he does add, in reference to "lost harmony": "These two words were the stuff of dreams, but what could a lost harmony really consist of?"

Good question, as they all are, I think, and I found myself wondering how I would answer them.  I also wondered, considering that in the book these questions are directed toward "young people", whether I would have answered differently when the narrator's age, around 20, than I would answer now, at age 58.

For question one, I know I would have said "be part of the revolution" when I was 20, but now...I have my doubts.  I'm talking about actual, full-blown revolution here, whatever that even means, not merely the specifics of the current moment and the coming presidential election.  Not that I don't think a revolution of a particular sort, with lethal implications, shouldn't come down on a large swath of people, but I'm less optimistic now about the fallout from revolutions than I was, say, 40 years ago.  After the optimism and change, the usual reversion, by those in charge, to power grabs and repression and corruption.  Or so I tend to think nowadays.  Revolutions will happen and at times need to happen, but all things considered, would I rather just stay to myself and contemplate a beautiful landscape?  At this point, though I'm not one hundred percent certain about this, I probably would.

Question two:  Not even a semblance of a doubt for this one. Once I might have said I opt for the depth of torment because isn't that what writers and artists of all stripes, as history has shown, are supposed to be like? Nonsense. I completely come down with a preference now for the lightness of happiness. Anyway, by now I realize that the whole equating of depth with torment is silly.  The lightness of happiness! I even like the phrasing. It's not easy to achieve, though.

And question three: change your life or rediscover a lost harmony.  I'm with Modiano (or Modiano’s character) again here.  Sometimes, obviously, you need to make changes in your life, but as the novel’s narrator says, lost harmony is the "stuff of dreams".  It's a sense you have that may not even be based on anything real.  What lost harmony?  Did a harmony ever exist?  I don't know, honestly, but somehow reading Modiano, I knew exactly what his character meant by saying he would love to rediscover it.  If nothing else, that's a great reading moment, a feeling of harmony shared with an author you find simpatico.  And that's nothing to be frowned at.

Anyone have any thoughts on what they would answer to these three questions?

This is completely fascinating. And like you, Scott, I think my answers would have been one things thirty years ago, another now--and I'm leaning your way in each case.