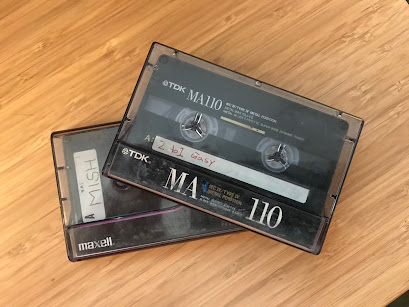 My last tape player died this month. It was random and rarely used—our 2004 Honda CRV came with both that and a CD player. Maybe that was the year Honda couldn’t decide whether to switch over to the newfangled CD technology. Give ’em both, make everybody happy.

I hadn’t used it in quite a while; it was my husband who was cleaning the car, found two dusty tapes in the glove box and decided to pop one into the player. No luck. Did I want him to throw them away?

God, no. Those were—are—precious. They were gifts that required both thought and time. Given to me back when there were no algorithms pointing to similar songs, no already curated playlists, no point-and-click-and-you’re-done convenience.

Back when a mix tape was a declaration of love, or a gesture of friendship, or a reward for beating someone at a certain beverage consumption game popular on college campuses.

My two tapes have more miles on them than the Honda does. They took me across the country multiple times: Missouri-to-California and back; Missouri-to-Washington, DC, and back; Missouri-to-Florida; Florida-to-Seattle; and Seattle to the Bay Area. It’s a miracle they didn’t give up and curl into a tangle of weary ribbon somewhere in the middle of Kansas. I couldn’t possibly throw them away.

So now they sit on a shelf—obsolete but essential. I’m going to get on iTunes and put together a playlist of all the songs, even though I know them by heart. But I’ll keep the brittle plastic, too—as a reminder of all those miles, and the extravagant effort someone put into keeping me company along the way.

When I come across an old mix tape, I can't toss them out. Such Gen X memories.

When I was a kid, my dad had 3-4 LPs that he'd play on Christmas morning as we opened presents. One was the Michigan marching band doing Christmas music; another may have been a Leonard Berstein-led orchestra. But those arrangments and sequences epitomized Christmas to me. Fast forward to my 20s and my first year overseas in teh Army for Christmas. I asked Dad to put together a tape for me, and he did. At the end, he and my mom both wished me Merry Christmas. I held on to that tape for the longest time; they died in 94 and 98. It's missing now, and it kills me that it's gone.