Doing the YA Hustle

Scott's note: Richie Narvaez guest blogs this week, and with good reason.  He has a new book out.  But it's a type of book he's never written before. It's...

Let him tell it.

Doing the YA Hustle
by Richie Narvaez

I recently wrote my first young adult mystery novel. Some writers might balk at the thought of writing what they consider to be watered-down pandercandy, and I would’ve agreed with them before starting this project. But I realized I had nothing to lose. I’ve a couple of books out, but there is no Richie Narvaez brand to undermine, and what few fans I have (Hi, Pete!) seem open-minded. So I said: “YA? Why not?”

There But for the Grace of God
At first, my decision was strictly mercenary. Ever since I started writing crime fiction (in the aughts), people have kicked my shins about the idea. “You should write a YA.” “The only money is in YA.” “Nobody cares unless you write YA.” I thought: I wouldn’t mind not having to worry about paying rent next month. Let’s see what gold there is in them thar hills!

But, also, part of that shin kicking took place because there was and continues to be a desperate call for representation of diverse voices in all genres, particularly the most popular ones. Here was a chance for me to help fill that void.

And then I was curious if I could do it. Writing is a craft, like pottery, and I didn’t want to keep turning out the same old coffee mug. Here was a way I could stretch my creative muscles. 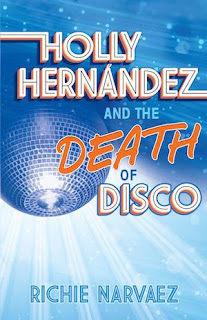 Born to Be Alive
In fact, I had a premise ready to go. Back in 2011, I contributed a short story called “Hating Holly Hernandez” to the anthology You Don’t Have a Clue: Latino Mysteries for Teens. In it, a character named Xander Herrera, a sort of Puerto Rican teen Ignatius J. Reilly, plots against his school rival, a famous Latina teen detective/Nancy Drew type who is tired of her fame.

To prepare, I read lots of YA to see what was being done. And, yes, much of it is pandercandy. But I can still recommend Nancy Drew as well as YA by Jess Lourey, Maureen Johnson, Adam Silvera, and E.L. Lockhart. With these books, I saw how flexible and fun the genre could be.

Pull Up to the Bumper
Now you might think I worried about content. The general edict with most, but certainly not all YA is the usual American hypocrisy: no sex scenes or hardcore cursing, but violence is A-OK. Now I do like a graphic murder scene and the occasional mention of naughty bits, but I avoided both here in order to stick to character and plot and eschew any inkling of excess. And as far as blue language, I try not to overdo it anyway, so, fuck it, I felt secure.

What I did worry most about was being a man in his 50s trying to write/think like a teenager. Many of my friends might say, “Yeah, not much of a stretch.” Still, I feared I was out of my league.

Could I ever really understand the mindset of modern teen? Did I even want to? There would be a lot of argot to assimilate, and it’s not easy to sling slang smoothly in any era. So I decided to set the story back in 1979. I happened to have been a 14-year-old then, so I could reasonably do the walk-talk. Plus, it allowed me to ignore the modern elephant of Deus Ex Cell Phone.

Plus, placing it during my teen years in Brooklyn during the (purported) end of the Disco Era gave me all the material I would need for setting and plot.

Last Dance?
The result is Holly Hernandez and the Death of Disco (Piñata Books, 2020). I think it features the naturalism I like to have in all my work, and I enjoyed revisiting 1970s New York City and commenting on the historical importance of disco music.

Would I write another YA? I think there are more stories to tell, but let’s see how this song plays out first.
***
Holly Hernandez and the Death of Disco can be ordered here.
Posted by scott adlerberg at 3:00 AM