The Stone Song on audio

We've had the opportunity to listen to the fast-paced, pretty exciting story of a brother and sister who get caught up in one of those towns that gets locked down by the military because something secret and spooky is going on.

The stakes keep increasing at just about the right pace as the story moves on. If you're fan of the genre, this is one you'll probably want to give a go.

If you've got a holiday drive coming up in the next couple months, this would make a pretty good companion as the story is active, the pace is quick, and the bad guys are really bad.

As this is part of a blog tour for the book, check out what Karen said yesterday here. 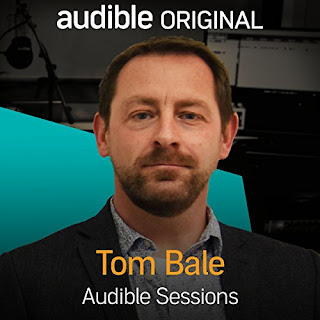 Audible will produce and record The Stone Song in its Grammy and Audie award-winning London studios. It will be released exclusively in audio on 7 November 2019. It is now available to pre-order on Audible here.

The Stone Song is a dystopian sci-fi thriller set in a small Sussex village, by best-selling author Tom Bale (See How They Run, All Fall Down, One Dark Night). With four teenagers pitted against deadly opposition, this is a story of supernatural menace that will appeal to fans of Stephen King and Stranger Things.

On a sweltering summer’s night, teenage siblings Jack and Lily witness a helicopter crash on the main road between Brighton and London. The next morning they wake to find their village has been sealed off from the entire world. A terrorist cell is holed up in Stenhurst – or at least that’s the official story, put out by sinister government agent Wynter and his vicious sidekick, Major Kellett.

But later that day, Lily and Jack stumble on the truth: the authorities are hunting for a mysterious creature, labelled CatX, who escaped during the crash. Together with their friends, Erin and Oliver, Lily and Jack take it upon themselves to defy the lockdown and protect the creature, no matter what the risks.

The stakes are raised still further when a team of American agents arrive with their own unique technologies. Nobody who sees the CatX must be allowed to survive, and yet it soon becomes clear that there is a much bigger secret here...one that threatens the entire world.

The Stone Song features an exclusive interview with narrator Raza Jaffrey at the end of the audiobook, in which he talks about the narration experience, his career as an actor and the things (and people) he loves to listen to. 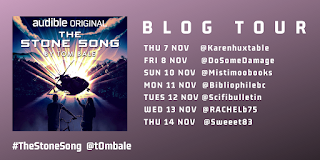 I loved Stranger Things. This sounds like a winner.