One of the best things about a crime fiction convention is all the people you meet. This happens in the hallways and book signing lines and most definitely at the bar. Last week in Dallas, I ran into Shawn Reilly Simmons (who I met at a previous convention, natch), and she introduced me to Jonathan Brown. His debut novel came out on Monday. All he had to say was "rock drummer" and "amateur PI," and I was asking if he'd come over to Do Some Damage and tell us more. Take it away, Jonathan . . . 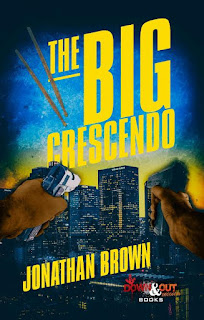 By Jonathan Brown
When I busted out of the doors of the Musician’s Institute of Technology in Hollywood I jumped into the music scene as a drummer for hire. I took any gig that would pay me 50 bucks—but it was usually considerably less than that. While mowing down shows and carving up LA’s musical landscape I took notes—actual notes—journal style.
I met characters rich with every personality trait in the rainbow, of every ethnicity and all levels of ego, from the painfully shy to the diva-for-no-damn-reason. As I laid down groove upon groove I clocked every move. I spied every tic, heard every spoken word and observed all mannerisms. If I were on the FBI’s radar at the time the Profiler Division would have considered recruiting me.
As I moved from one crappy apartment to another I took my notes with me and eventually came up with a protagonist: Lou Crasher. The “Crash” in Crasher is a nod to cymbals crashing—yeah, I’m clever like that.
When my editor read an early version of The Big Crescendo she told me I had way too many characters. I didn’t disagree with her. “But there were so many people in the bars, streets, pawnshops and liquor stores in those days,” I told her. She said that although the characters have great depth and description and come across very real most of them are “drive by” characters. She was correct yet again. I over-wrote those cats because I’ve always paid attention to the “drive bys” as well as the main cats holding down the conversation. Alas, they didn’t move my story along so I had to clip ’em. I shed no tears over those peripheral players because the story is the boss, not me.
So who is Lou? Lou is a good natured, cocktail swilling, wisecracking rock drummer turned amateur PI who far too often finds his neck beneath the bad guy’s boot heel. But Crasher won’t lie down for anybody, so while removing said boot from said neck he ultimately solves crimes. Well, for the most part anyway, which is why the word “amateur” precedes P.I. In addition to fighting crime he somehow manages to make it to his gigs on time.
While getting to know Lou he’ll take you on a rock n roll ride through the L.A. music scene; he’ll chase a dame who may not be what she seems, he’ll attempt to bust up an underground musical gear theft ring, which, unfortunately dumps him into the seedy drug world. Oh, and a heavyweight coke snorting music producer will dispatch Lou to find a vintage snare drum that may or may not have belonged to the late great Frederick Douglas. If Lou’s wisecracking doesn’t get his head split open and if he can keep his cocktails under control he might just win this thing.
The Big Crescendo dropped November 4. Word on the street is the printer is running low on toner and the books are flying off the shelves. Get it while the gettin’s hot. You don’t want to be without a chair when the music stops. The follow up Don’t Shoot The Drummer is perilously close to being done and will be spread to the masses at the end of 2020 on Down and Out Books. Ya oughtta snag that one too! 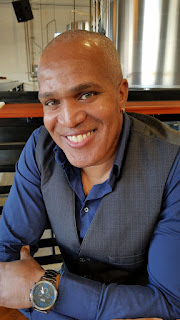 Jonathan began taking fiction writing seriously in 2010. A handful of his short stories are in Shotgun Honey Online magazine. In 2018 Brown released a noir novella titled: Moose’s Law…A Doug ‘Moose’ McCrae Story. Moose fans are demanding this be a series and knowing Brown, he’ll deliver. He’s narrated the audiobook (his first) and that will join his print book on Amazon in December 2019. Brown also wrote A Boxing Trainer’s Journey…A Novel Based On the Life of Angelo Dundee for Mentoris Books. Kirkus Reviews called it, “A journalistically rigorous depiction of both Angelo Dundee and boxing.” Mentoris has since commissioned Brown to narrate the audiobook for Dundee as well as write a novel based on the life of Vince Lombardi. Find out more at www.jonathanbrownwriter.com.
In addition to teaching drums and writing Jonathan works as a personal trainer. And although he has never laced up the gloves in a serious way like his idol Muhammad Ali, he does have a background in Hapkido karate. Currently he and his wife enjoy the good life in sunny Southern California. As a button at the close of every fitness class he imparts his favorite phrase to his clients: All of the world’s problems can be solved with love!
Find The Big Crescendo at Down & Out Books, IndieBound, Amazon, Barnes & Noble, or iBooks.
Posted by Claire Booth at 3:00 AM

Thanks for introducing us to Jonathan, Claire. I've added The Big Crescendo to my "What to Read" list.