The twist in the tail 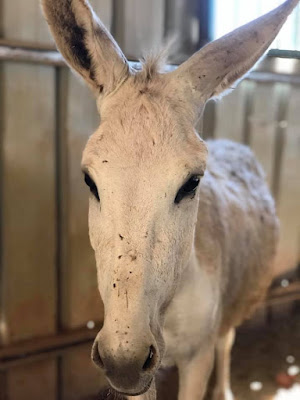 I've written my whole life, and been a published author for several years now, and every time I think I have the whole thing locked down, the universe sort of twists. Sometimes, it shows me something shitty about the whole writing thing that I had been unaware of, but others - more often, to be honest - it shows me something brilliant that would never have happened to me if I hadn't written a book, sent it out into the world, and allowed myself to say "I'm a writer."
One of those amazing things is the sheer volume of friends I have acquired since I became a writer. I was never exactly friendless, but I have found, in writing, my tribe, and it's my tribe that sent this blessing my way.

You see, back in July my dear friend Paddy Magrane (author of the brilliant Chase Thrillers Disorder and Denial) was doing some work in Israel at a charity called Safe Haven for Donkeys.

Safe Haven for Donkeys was set up in 2000 to help the thousands of working donkeys in Israel and the West Bank. They provide life-long care to around 200 unwanted and abused donkeys of all ages but the charity’s work does not stop at the sanctuary gates.

Each month, their mobile clinic helps around 1,000 working donkeys, mules and horses across the West Bank and they also have a permanent clinic in the city of Nablus, where my friend Paddy was working.

In early July, Paddy, at the clinic, met a donkey who’s leg had been broken

Now, a donkey with a broken leg is of little use and if the owner cannot afford vets bills and / or decides that the cost of feeding and healing the donkey is more than he’s willing to bear, the animals can be abandoned. Cast aside the way you or I might chuck a broken vase in the trash.

And that’s what had happened to this donkey. He’d been found, by the outreach people at Save Haven For Donkeys, abandoned in the street in Hebron. Left to starve.

And so they took him in, and by the time Paddy met him, the donkey had made a full recovery. One small problem remained. He had no name. As a visitor, Paddy was given the huge honour of naming him.

It was the third of July, Paddy was far from home, but he knew that the day in question was my birthday, and so he christened this donkey – the one who was left to die, and who got lucky and lived –  Derek.

And so here, I suppose, we need to talk about me. Like I said, I write crime novels. They’re about – spoiler – crimes. But they’re also about family and friendship and love and compassion (but not, so far, about donkeys). But nothing prepared me for how emotional I’d feel at this naming. Cos I’ve often, in the past, felt broken and abandoned. Sometimes it’s been because I’ve broken and abandoned my self, but often it’s been because I’m hearing the voices telling me that people like me can’t do what I’ve decided I really want to do; and being told you’re not good enough – being told by the people entrusted to educate and form your spirit that people like you are worthless – can leave you feeling lost. Abandoned. Alone. So Derek the Donkey made perfect sense to me.

Last week, Paddy was back in Nablus, and sent me a picture of Derek, sprightly and spirited (and certainly more spirited than I’d be if I’d been left out by the trash with a broken leg just a few months previously).

Paddy was given the honour of helping put the named bridle on to my spirit animal. It’s not the first time I’ve been referred to as a donkey and had a bridle put on me but the previous time was in a long condemned club on Tooley Street in the late eighties, so we’ll leave that story for another time… 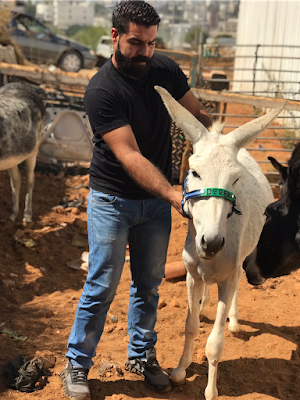 Suffice it to say that Derek and Doctor Studley Al-Vetski are doing well. Yes, I saw your eyes straying to Dr Studley. Isn’t it lovely when the people who help animals are as beautiful on the outside as they are on the inside? And that, I think, is where I will leave that one.

Many of the donkeys at Safe Haven are available for adoption. Chill: This does not mean they do a home visit and then send your donkey of choice around in a crate (though I am sure that some of you are now considering ‘donkeysbymail’ as a business venture). What it really means is you pay an amount, they send you a picture and a fact file and a cuddly  donkey toy and you get the joy of knowing that you’ve done something for something and someone else.

I highly recommend it. I’ve already adopted Daniel in honour of the titular hero of my series, and am negotiating a name change for a Caz so I can adopt the pair and have them as enduring mascots at book signings.

Derek Farrell is the author of 6 Danny bird mysteries. “Death of a Diva,” “Death of a Nobody,” “Death of a Devil,” and “Death of an Angel” can all be purchased from the usual e-stores or directly from the publisher here. The fifth, “Come to Dust,” is available exclusively as a free download from his website . The sixth - Death of a Sinner - is on Fahrenheit Press's fall 19 slate.