I want to write about the last coiuple of weeks - I got into my stride with the new book, and read at a Polari Salon at a great little crime festival in the seaside town of Morecambe.

But I'm currently in hospital for an MRI scan (remember those migraines I mentioned a few weeks back) so instead of waffling on about me (to be honest, I'm still trying to make sense of the past couple of weeks) I wanted to share my love for a new book that gave me all the feels (including making me stand on a train platform crying). 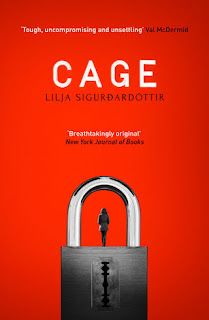 I don’t know if the Icelandic language has a word for Puzzle-box, but if they do, then it would perfectly describe this novel.

This last act in the trilogy which began with Snare (2017) and proceeded with Trap (2018) isn’t another unnecessary sequel featuring the characters you’ve loved through the previous books (hello David Lagercrantz) but an author asking what’s next for characters who have been put into – and removed from – the crucible.

It’s almost impossible to talk too much about the plot of any of these books without giving away spoilers, but I’m going to try by saying that the first two books focussed on the efforts of Sonja, a newly divorced mother, to regain custody of her son Tomas whilst escaping the grip of a global drugs syndicate who have been using her to smuggle drugs into Iceland. This story was threaded delicately alongside that of Agla, a Financier who’s legal but morally dubious behaviours – alongside those of her fellow Banksters – have resulted, just before Snare begins, in the Icelandic financial crash and whose romantic relationship with Sonja precipitated the latter’s ugly divorce. Woven alongside were the stories of an honest customs officer placed in an unbearable position, crooked lawyers, corrupt politicians, drug smugglers, gangsters, junkies, lawyers and their extended families.

The whole – if it had stopped at two books – would have been a brilliant tapestry that used a gripping, pacey crime novel structure to present and consider an entire culture at a moment in time (Think Ibsen’s “A Dollshouse,” but with cocaine and a tiger in a cage). But the third adds a whole new layer, and completes a trilogy which in thematic scope and detailed consideration is a true Saga.

The same witty and incisive consideration of the culture is there, the same people in impossible situations, and the same realisation that – as in the best of fiction – the knowledge that not everyone will be getting out of this story well. But this time, the novel also grapples with questions of redemption and corruption in ways that I found really powerful.

Basically, in Cage (which opens six years after Trap ended) everything has changed. People who were previously heroic are now soiled, their engagement with the world having sullied and (in some cases) possibly ruined them, whilst others who had appeared villainous in earlier books are shown, here, to be paying for their crimes and (again, in at least one case) reconsidering their paths.

The plot is yet another tapestry that encompasses new media, commodity fraud, more drugs, the rise of right-wing populism and racial hatred, corruption, the relationships between parents and children (I heard the ABBA song ‘slipping through my fingers’ in my head often during some sections of the book) and home-grown terrorism. But it manages to keep all of these threads not only spinning brilliantly, but weaves them together  – solidifies the whole into a hugely satisfying single tapestry  - so well that I read the last thirty pages in a breathless, eyes-glued-to-the-page state that meant I almost missed my train stop.

I got off the train, finished the last three pages standing on the platform at London Bridge, and promptly burst into tears.

Cage – like Trap and Snare before it – is a wonderful book. Something – like a puzzle box – that seems straightforward and entertaining but which has many depths, many surprises and which will stay with you long after the last page is turned.

Derek Farrell is the author of 6 Danny bird mysteries. “Death of a Diva,” “Death of a Nobody,” “Death of a Devil,” and “Death of an Angel” can all be purchased from the usual e-stores or directly from the publisher here. The fifth, “Come to Dust,” is available exclusively as a free download from his website . The sixth - Death of a Sinner - is on Fahrenheit Press's fall 19 slate.

Posted by Derek Farrell at 4:38 AM