Blog Tour: Call Down the Thunder

Today we've got a sneak peak at the new Dietrich Kalteis novel. Check the schedule at the end of this post to find out where to go tomorrow!

“Set in Depression-era Kansas, this colorful, character-driven crime novel pits desperate small-town folk against racists and thugs. Kalteis does a fine job of scene setting; the reader can practically smell the horehound candy at the general store and feel the grit in the air at Sonny’s farm. Fans of historical crime fiction won’t want to miss this.” — Publishers Weekly

Blog Tour: Call Down the Thunder by Dietrich Kalteis

Sonny Myers narrowed his eyes against the gust, felt the rush of cold, the air crackling: static electricity churning and hellfire flashing inside the mass of black looming high over the flat land. The yard a frenzy of whipping sand and debris by the time he got his mule and car in the barn. Felt like the end of times coming. Through the boiling wall of sand, Sonny made out two sets of headlights approaching on the county road. Could be coming for shelter from the duster, but something told him no. Going to the house, reaching inside the door, he took the shotgun and stepped off the porch.

Coming to the door, Clara wanting to have a look.

“Just a blow.” He told her to stay inside.

“What you gonna do, shoot it?”

His eyes slits, Sonny stepped into the yard, forcing his steps, having to lean into it, going toward the headlights.

Looked like two pickups stopped down by the mailbox, lights dim against the blasting sand. Doors opened and men got out. Nobody he knew. Best he could tell there were six of them, pulling hoods on. Two going to the bed of the first truck, pulling a long cross from the back. Sonny smelling kerosene and oil from where he stood, halfway to the house. A couple of them fanned to his left, heading for the side of the house, flanking him.

Sonny fired in the air, the only warning they’d get, popping in another shell. Leaving the ones by the trucks, Sonny went after the pair going wide around the house. Couldn’t see twenty feet ahead as the duster bore down. Hurrying around the side, his eyes searched for them somewhere ahead of him. One hand against the boards, he made his way around the back, staying low. Expecting an ambush. Ready to shoot if he had to. Getting to the far side before he smelled the smoke. Thinking it was the burning cross. Then he caught figures moving ahead of him.

“Halt,” he called, wondering what kind of thing was that to yell. Couldn’t shoot, knowing Clara wouldn’t stay inside like he told her. No point in shooting his wife. Catching sight of the flames, the cross burning down by the mailbox, the sound of car doors shutting, taillights pulling away.

Then Clara screamed from the porch, stumbling down the steps, hand on the porch rail, she moved along and found him, pointing to the barn. Sonny catching the flicker, another man running from it and crossing the open ground, heading for the trucks. Putting the stock to his shoulder, Sonny fired.Pretty sure he winged the son of a bitch, reaching in his pocket for another shell that wasn’t there. The man chased after the trucks and disappeared.

The dry boards caught fast, flames flicked to the roof beams and spread, the straw floor alight and swirling around. Bats flew around the rafters, chickens getting out of there. The mule screaming.

Handing Clara the shotgun, Sonny jumped down along the west side, swatting and kicking at the burning straw with his shoe. The heat like a wall, pushing him back. Slapping at the cuff of his overalls as it caught. No way to get to the back. The heat was too much. Couldn’t get to the screaming mule and pull her from the stall. Taking Clara, he turned her for the door.

Driven out, both of them choking from the smoke, blinded by the sand. The flames shooting from the roof, long fingers reaching across to the house. The triangle clanging like mad from the porch post. Wrapping his arms around her, Sonny got her across the yard. A picket struck his back and knocked him down. Clara tugged him to his feet. Getting to the porch. The sand blasting so hard, they could barely see the barn, both getting inside the house. Praying it wouldn’t catch fire too. 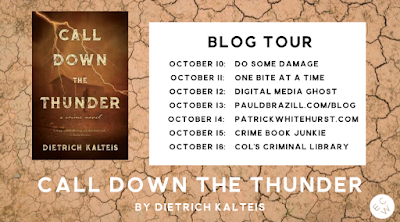 on twitter @dietrichkalteis
Posted by Steve Weddle at 3:00 AM