Year of an Indie Writer: Week 38

I was told there'd be no math in writing.

Turns out, there is, and it's telling.

The Math And Nothing But The Math


My wife is learning a new art technique: paint pouring. It involves putting various amounts of paint and other synthetics in a receptacle (cup, colander, anything really) and pouring it on the canvas. Then you manipulate the canvas in your hands until you find your work of art.

Let me give you an example. 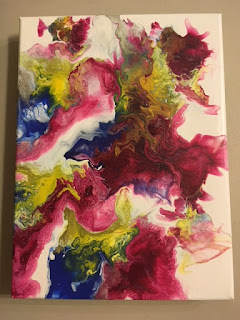 But here's the thing: at almost any stage, you can literally scrape all the paint off and start over.

Dean has done math posts before, mainly from a word count point of view. Here he examines the finances. It's sobering. I read his post first when it was published on Wednesday. As an indie writer, I'm part of the choir. But when I discovered the original post and read it, I was sobered even further. How many of us would, more or less, do the same thing? The answer is likely somewhere north of lot of us.

The biggest caveat to Dean's outlook is time. His view is long term. His way takes time. It'll likely end up making more money, but it'll be stretched out over years. For folks who intend to make a living writing as their sole income, they'll need money right now. For someone like me, who holds down a day job with hopes and dreams of writing fiction full time, I have the time to wait. Ain't always fun, but it's good steady work with writing on the side.

If you read the comments, you'll see me in there. I asked Dean about advertising and how we should factor in an advertising budget into the cost of a single book. His response was one, while it makes sense, I don't necessarily agree with 100%. "Let your books build," was his response. Over time, I should get the 42 books sold per month average he uses to make his case for the indie life. Sure, that's something, but I probably should have posed the question about promotion. How is the best way to promote out books? The age-old question, isn't it?

BTW, Dean does a follow-up. It's here.

Definitely food for thought. What are yours?


My wife and I enjoyed Season 3 of this BBC show earlier this year via our local PBS station, Houston's KUHT. The characters are a nice counterpoint to traditional cops in TV shows, even traditional cops in BBC police procedurals.  Neither DCI Cassie Stuart (Nicola Walker) or DI Sunny Khan (Sanjeev Bhaskar) are from the standard mold. Neither are troubled. Neither are raging alcoholics with some vague past that threatens to rear its ugly head. They're just ...people. Granted, people whose job it is to crack cold cases, but their just a couple of folks who care for and respect each other and get the job done.

And it's so refreshing.

That doesn't mean this pair is dull. Far from it. But they are refreshing in their mundane-ness.

Of the three seasons, the second really hits home partly for the story and plot, but mainly for the acting. There are a trio of folks Cassie and Sunny zero in on during their investigation, and those three actors--Mark Bonnar as Colin Osborne; Badria Timimi as Sara Mahmoud; and Rosie Cavaliero as Marion Kelsey--are fantastic. There is a moment in the last episode where Bonnar has a particular scene, that, as my wife and I sat watching, we were utterly spellbound. When the scene shifted, I realized I had involuntarily held my breath for a bit, so engrossed was I in what he was saying and the spectacular delivery. Turns out he won a BAFTA for the role.

You watched the show?
Posted by Scott D. Parker at 1:00 AM

Scott, yes, seems to be something in the air. A great take on this is from Vincent Zandri, with another sobering look at the "big" money: http://vincentzandri.blogspot.com/2019/09/publishing-advances-arent-real-money.html

When it comes to Unforgotten, I am like you - I'm so weary of the drunken investigator or the investigator that willingly lets his or her family/home life slip away (and for this matter, the Lone Wolf investigator that does things that would never be tolerated in real life).

And I can't think of many actors that can portray anguish like Nicola Walker.

"I`ve shagged a lot of gorgeous birds in my time but they all pale into nothingness when compared to the incredible 17 year-old Pauline Hickey from 1985, i would gladly give up the presidency in exchange for returning to 1985 and having my knob squashed between that amazing mega-titted lovelys unbelievable tits, that birds tits were totally beyond belief ! ! !"