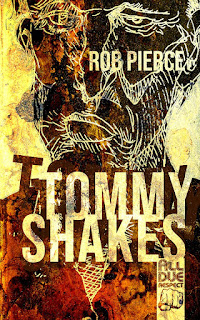 Tommy, a former addict now hitting the bottle, is a career criminal, though not very good at his job. He continues to make missteps while trying to save his marriage and broken relationship with his teenage son by taking one more big job. He thinks it’s about the money, but Tommy’s troubles go far deeper. Written by Rob Pierce and available from All Due Respect mid-September.


Rob Pierce is one of my favorite writers. Besides publishing a collection of short crime stories, a novella, and two novels—UNCLE DUST and WITH THE RIGHT ENEMIES—his work has also appeared in numerous anthologies and his otherworldly editing skills are in high demand.


Well-known and respected for his intelligent, edgy crime thrillers he lines his writing with criminals and thugs. Average Joes and calloused accomplices. Mr. Pierce creates vivid and realistic communities and settings for his stories to take place and seemingly drags the bottom of the barrel for his villains.


“(Uncle)Dust was essentially the uglier side of me, the side that I pretty much always manage to restrain.” – Rob Pierce author of TOMMY SHAKES, UNCLE DUST and WITH THE RIGHT ENEMIES.


Yet, it is his protagonists that grab a reader and refuse to let go. They are tightly written to the smallest detail and familiar enough to make the reader pause. Uncle Dust. Vern. And now Tommy Shakes.


Rob Pierce took time out of his crazy schedule to chat about his new book, short stories and the healing balm of writing.

You've authored books, penned short stories and edited several anthologies. That's a lot of time you've spent on crime fiction. Of those creative experiences, which stands out the most in your memory?


Writing is best. Novels, short stories, either way, the thing being that a novel is more writing and feels like more of an accomplishment when completed. But my favorite of my short stories, “Thanksgiving, 1963,” about a Texas gun dealer and his family at the time of the JFK assassination, was a hell of a thing to research because a college football game was involved and there’s very little info out there about a college game played over 50 years ago. Plus, it’s about the economics of violence and feels more relevant now than when I wrote it.


I thought With the Right Enemies was probably the most difficult to read due to all the innocent victims, but I found it enjoyable once I finished suffering my way through it. Enjoy writing it? I want the reader to feel the characters’ pain and the only way to do that is for me to feel it while writing it. My writing’s a therapeutic addiction—I need the process and I love making a scene work, although whether something works is an opinion that can change frequently. I do throw a pretty good amount of humor into my writing so I think that’s enjoyable.

How would you describe Tommy Shakes and the worrisome situation he has backed himself into?


Tommy is a career criminal who isn’t as good at his work as he thinks he is. He used to be a junkie and now he’s an alcoholic and his marriage is in trouble, due to his job and his drinking. He figures he can patch things up by pulling a big heist but the robbery turns into a shootout and one of the victims his crew is robbing works for a local gang boss. If the boss finds out who killed his lieutenant, murder one will be the least of Tommy’s problems. Three guesses whether he finds out.


Do you see similarities between yourself and Tommy or any previous characters?


The protagonists, always. After Mike Monson accepted Uncle Dust for All Due Respect, he asked how I wrote that character. I just wrote. Dust was essentially the uglier side of me, the side that I pretty much always manage to restrain. But once you know the possibility’s in you, writing that is easy. Vern of Vern in the Heat was a similar character to Dust, so same thing. Vollmer in With the Right Enemies, though—putting myself in that character’s place was real work because he was so severely lacking in positive characteristics. I’d given him the background to explain it but that one was still a performance piece.


As to Tommy—I wrote about his failing marriage while trying to salvage my own, and the last few chapters were written slowly because I knew at that point that my wife was moving out. And I share Tommy’s biggest problems: I immerse myself in my work and I enjoy drinking. And my work (the writing, anyway, not that damned job that pays the bills) is pretty much always noir or hardboiled, so hardly rife with happy endings. My life isn’t awful right now, quite the opposite, but awful helped me write that book. Not to make light of the demise of my marriage. I’m not laughing at the funeral, but now that the bastard’s dead, let’s enjoy the wake.

Posted by Marietta Miles at 7:09 AM