Review: Dead to Me 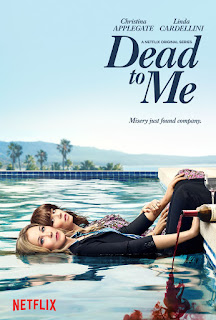 
I sat down to watch Dead to Me recently, the Netflix limited series starring Christina Applegate. I thought it looked interesting when I first heard about it—a woman tries to cope after her husband is killed in a hit-and-run car accident. But instead of a meditation on grief, I got a masterpiece of suspense. Ten episodes of perfection, each a perfectly paced jewel.
Applegate is amazing—fully adult in a way most roles don’t let her be. She’s allowed to look all of her beautiful, lined, lived-in 47 years. And she gets to be a realistic woman—you know, complicated. Funny, sarcastic, loving, furious. Desperate to help her kids. Desperate to track down who killed her husband. Desperate not to be weighed down by a woman she meets at a grief support group.
That’s really what kicks things off, and the other woman, Linda Cardellini, becomes more of a friend than Applegate’s character could ever imagine. Cardellini’s character is as complex as it gets. She does everything a good character is supposed to do. She evolves. She surprises. She makes you unsure whether you love or hate her.
These two women drive the story, and it’s a joy to watch them tear through such an expertly crafted plot. They’re supported by a love interest played by the terrific Brandon Scott and a mother-in-law played by Valerie Mahaffey, one of my all-time faves.
And then there’s James Marsden, the boyfriend. He’s great, but I’d love this casting for the irony alone. Marsden’s often been pigeon-holed in exactly the sort of way women usually are. A beautiful face given one-dimensional roles. He’s more than just eye candy here, because no character is relegated to cookie-cutter status.
Honestly, there isn’t a single one-note character in the whole series. (Wait, I take that back. Ed Asner. He’s a one-note old guy in a nursing home. But hey, he’s Ed Asner. He’s given us enough notes over the years. He’s earned an easy paycheck.)
That’s the sign of a deft and confident vision, and that’s thanks to show creator Liz Feldman, a comedian who’s written for 2 Broke Girls, Ellen, and other shows. She doesn’t condescend to her characters or her viewers, and I hope that this is the first in a long string of huge successes for her.
Posted by Claire Booth at 10:42 AM

This is a great wrap-up! I loved this show.

Thanks for this review - I have not seen it yet and hope it is still available. Have always enjoyed Applegate - some things more than others, but this sounds great!
Thanks for posting.

Enjoyed this review, Claire. I really liked the series as well.