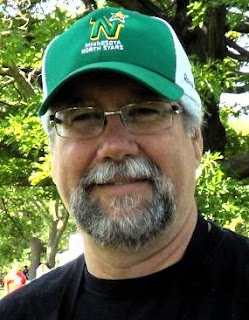 By John McFetridge
About the same time I started with Do Some Damage I became a participant in the Canadian Longitudinal Study on Aging. At the time I felt far too young, but the participants chosen were between the ages of 45 and 85 when recruited and were to stay with the study for at least 20 years or until death. I was within the age range.

The aging study is a long questionnaire with some memory tests thrown in, done on the phone every couple of years. A lot of the questions are about my general health and some are about what medications do I take and some are about how active am I and that kind of thing. When I first started the study the interview was a lot of fun, I felt great being in good health, not taking any meds and being active. And I did pretty well at the memory tests.

Some of the questions were about personal independence, could I dress myself and wash myself and make my own meals. Good questions for an aging study and a reminder about what's coming if I'm lucky enough to make it that far.

And some of the questions are about mental health; depression, loneliness, feelings of failure and regret. I take longer to answer those than I did ten years ago.

Luckily I can still answer yes to, "Do you have more than 22 of tour own teeth," but it worries me about where this is headed.

Another one that's a little tough is; People are generally good. Lately I've been saying what I think is wrong with the world is that people are generally awful. I don't really mean it, but I have started to question if always saying that we believe people are essentially good has been the best way to look at the world. People can certainly be good but, wow, can they also be really awful.

This time when I was asked if I was retired, partly retired, working part-time, or working full-time and I answered that I was partly retired. When we started Do Some Damage I was on an almost book-a-year pace which I'd planned to keep going for a lot longer than I did. The follow-up questions about why I was still working were a little tough for me to answer because the truth is, the truth I like to avoid is, that I'm not as good at it anymore. It takes me a lot longer to write a page and more and more often struggle to remember common words.

Well, that's okay, a big vocabulary was never what my writing was about anyway.

I'm pretty sure the next questionnaire I do for the study I won't do nearly as well on the memory test sections.

Between the time I started in the study, and we started Do Some Damage, I wrote three novels that are set in the 1970s, when I was between 10 and 20 years old. There's a lot of nostalgia in those books (probably too much) and I was feeling nostalgic at the time but for the most part that's passed now. That may be part of aging, too.

Getting to the end of my fifties (I turn 60 this year) I have been surprised that it's been my best decade. I certainly didn't expect that going into it. And now I expect my sixties will be even better and I really never expected that.

I think taking the aging survey has helped me realize that aging, at least this far, doesn't have to be as bad as Hollywood makes it out to be.

It's not so much the questions themselves, it's the process of answering them. This aging study looks like it will result in some very useful data for future policy-makers, but it's also just a good idea to stop and take an accounting of things once in a while. Which isn't exactly an original idea, but I think it's worth repeating.

And so are anniversaries. So, Happy Tenth Anniversary to Do Some Damage, it's a good time to stop and take a look back and a good time to look forward. I'm only partly-retired, I have a new novel coming out next year and it may be the first in a new private eye series, I'm not sure. I'm working on the second one now but I keep forgetting words like "suspect" and "case" and "client."

If you're interested in the aging study you can find information here:
https://www.clsa-elcv.ca/
Posted by Steve Weddle at 3:00 AM