You Can't Choose How Your Writing Mind Works

I recently had dinner with a friend of mine who's a writer.  He was talking about how he almost never writes now without a screen on his laptop open to the Google homepage, or some page of the Internet.  He uses the Internet constantly while in the act of writing; it's an essential research tool for him, and with it he can find exactly what he needs, no matter how obscure, to make a particular detail he's presenting unexpected yet authentic.  I found this frequent and ongoing use of the Internet by a writer I very much respect interesting; he said that it's difficult for him to put down something on the page without knowing quite a lot of background about it, and one can delve into these backgrounds more thoroughly and easily than ever now because of the Internet.

Whatever works for you, do it, I thought. And my friend's describing how he needs to know so much about what's behind every detail he's writing down reminded me of a literary story I love.  It involves the great writers Paul and Jane Bowles, who were married, and originates from Paul's 1972 autobiography, Without Stopping. 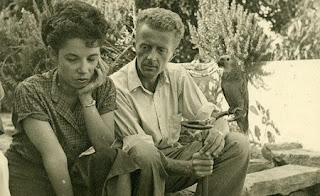 The two were living as expatriates in Fez, Morocco in the nineteen forties.  Both were working on novels.  Each morning they ate breakfast in bed in Jane's room, and afterwards, Paul would go to his room and they would each write.  Between the two rooms, they would keep the door open in case they wanted to talk to each other.

At some point, Jane called out, "Bupple [her pet name for Paul].  What's a cantilever, exactly?"

Absorbed in the last chapter of his novel, Paul said something that seemed, to him, fairly accurate.  He didn't think about Jane's question after answering and went right back to work on his book.  He kept making progress. But after 3 or 4 days, hearing little typing from Jane's room, he realized that Jane was not making progress on her book.  She was still stuck trying to get a character in her story from one side of a gorge to another.  Paul writes, "I got up and walked into her room.  We talked for a while about the problem, and I confessed my mystification.  'Why do you have to construct the damned thing?' I demanded.  'Why can't you just say it was there and let it go at that?'  She shook her head. 'If I don't know how it was built, I can't see it.'"  Paul was flabbergasted.  He never had thought that considerations such as Jane's would preoccupy any writer.

I told this story, while we were eating, to my friend, and he laughed.  He nodded his head.  He said he understood where Jane was coming from and said he was "totally down with that."  I laughed as well. The mental makeups of writers are so different and there's no telling what they need in their minds in order to get words down on a page, and I can't think of an anecdote that shows this better than the one about Paul and Jane Bowles.

I should add that over their lifetimes, taking their methods into account, that Paul was much more prolific than Jane.  Then again, sadly, Jane had a stroke at the age of forty and died well before Paul did.  He wrote four novels, many short stories, travel books, and his autobiography; she produced one novel, one play, and one collection of short stories.  But both, quite different as writers, have bodies of work of remarkable quality and originality, so pointing out this contrast of methods is not to say one beats the other.  Any writer can write only as he or she must write.

But, still, it does make one wonder.


Posted by scott adlerberg at 4:00 AM

I'm somewhere in between. I'd have to have a good idea of what it looked like, but how much detail would depend on how much I needed to describe so it would be useful for later.

I'm of the school where I have a Google screen open in the background. I may not use it all day, or I may want some telling detail to lend more verisimilitude. (And make the reader think I know more than I do.) I was working on my Western the other day and wanted to find an actual Pennsylvania Regiment that fought at Fredericksburg. It was just for a throwaway line, a former Confederate trying to get under a former Union soldier's skin. In poking around I discivered the 137th Pennsylvania was there, attached to the provost. Perfect. I also learned that, while the 137th Pennsylvania lost 59 men during the war, not a one was killed in combat; all died of disease. That was a nice little tidbit to add as I had the Union man slough off the jibe. His outfit had not been engaged at Marye's Heights, and, oh, by the way, you rebs never killed any of ours.

Definitely closer to Paul. The Bertolucci film about them ("The sheltering sky") is really great (and looks and sounds magnificent).