I write fiction. I tell stories. I’m gay. I knew I was gay for a long time before admitting it to myself, and one of the things I’ve grown to realise is how the absence of heroes who are like us can have a lasting impact on self image and self worth.

So reading, on July 1st about Willem Arondeus was something I found deeply moving and profoundly inspirational.

Arondeus was born in 1894 to Hendrik Cornelis Arondeus (a fuel trader) and Catharina Wilhelmina de Vries. He was a founder member of the Dutch Resistance & Righteous Among the Nations for saving Jewish lives. He was murdered by the Nazis on July 1st 1943.

He grew up in Amsterdam. When he was 17 he told his parents that he was gay and within a year, they had kicked him out for refusing to hide his sexuality. At aged eighteen Arondeus was forced to make a living for himself, all connection with his family having been severed.

Turning to his talents, he painted, created illustrations & wrote, and it was a full ten years after striking out on his own before his talent was finally rewarded and he was commissioned to paint a mural for Rotterdam Town Hall (1923), though money was still hard to come by.

By the early thirties, Arondeus had worked on artwork for a number of poetry books as well as producing the artwork for a calendar. However, money continued to be in short supply. He was a virtual unknown and lived in impoverished circumstances. In 1932 he moved to a rural area near Apeldoorn, met Jan Tijssen, the son of a greengrocer, and the two fell in love. They set up home together, and remained a couple through the thirties.

Though money was still in incredibly short supply, Arondeus refused to go on welfare, instead turning his focus to writing novels & biographies which - by 1935 - had begun to give him financial stability at last. 1938 saw him release two novels: Het Uilenhuis & In de Bloeiende Ramenas. These included his own illustrations.

In 1939 Arondeus published a biography of the painter Matthijs Maris & this helped him climb out of poverty. It is his best known work.

On May 10th 1940, the Nazis invaded the Netherlands and within five days the Dutch Forces, despite fighting bravely were outnumbered and – after Rotterdam had been levelled in a Blitzkrieg – surrendered to prevent more civilian deaths.

The Nazis now set about rolling out their Final Solution to annihilate the Jewish, LGBTQI & Roma populations in the Netherlands. As always with such murderers, they set about legitimising their murder via the use of legal structures. To this end they immediately criminalised homosexuality and set about gathering lists of ‘undesirables’, in this case via a registration plan for all citizens which required ethnicity, religion and other characteristics to be stated.

To achieve this goal, the Nazis offered a bounty to Dutch police and administration officials to locate and identify Jews, aiding in their capture. But, uniquely among all German occupied areas, the city of Amsterdam organized an industrial action to protest the persecution of its Jewish citizens.

Willem’s sense of justice informed his decision to join the Resistance. He was one of the first. In 1942, he founded Branderisbrief, a magazine intended to inspire his fellow artists to resist. He urged them to hide the Jews & use their skills to help forge papers. He was putting himself at great risk. He had realised that the registration of Dutch Jews & others was not for their safety, as claimed. Within a year the magazine merged with De Vrije Kunstenaar (The Free Artist) which was edited by the sculptor Gerrit van der Veen & the new publication began to explicitly urge mass resistance to the Nazis plans.

Arondeus put his own artistic skills to use by forging identity cards for Jews so that they might escape from torture & murder by the Nazis. However for the cards to work, the official Population Registration needed to be destroyed or the counterfeits would be easily identified

Willem, Gerrit, Sjoerd Bakker (a tailor), Johan Brouwer (a writer) & the lesbian cellist Frieda Belinfante formed a resistance council with others. Many of them were gay & their goal was to destroy the Registration Office.

Now, Imma stop here for a minute: A gay artist, a sculptor, a tailor, a writer  a Lesbian Cellist. Why is this not already a Hollywood blockbuster? Three Gays a Sculptor and a Lesbian Cellist versus The Nazis. Seriously: How? 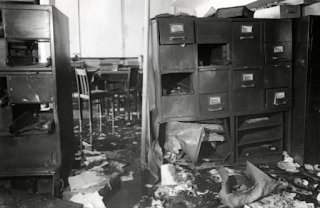 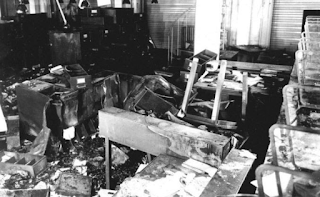 On the 27th March 1943, Willem, his friend Gerrit van der Veen & the others disguised themselves as Dutch police. They gained access to the Municipal Office for Population Registration & blew it up.

The group were betrayed and Arondeus was arrested on April 1st.. He was tried on June 18th 1943 & sentenced to death in a sham trial. At his trial Arondeus bravely claimed complete responsibility for the bombing. Despite this, the Nazis executed 13 of the group.

Arondeus made a point of telling his lawyer to make the information that he, Bakker (the tailor) and Brouwer (the writer) were gay, and asked his lawyer to “Tell the people that gays are no cowards.”

On the morning of July 1st, Arondeus, in shackles, was driven to the dunes outside Overveen, and was tied to a wooden post. A hood was put over his head and he was murdered by firing squad.

Arondeus’ role, in one of the most important Dutch acts of resistance, was played down for many years in the Netherlands due to his sexuality. However with greater openness, his bravery was finally recognised by the Dutch government in 1984.

In 1986 Yad Vashem recognised Willem Arondeus as Righteous Among the Nations. This is a supreme honour for those who put themselves at risk to save Jews.

His name was Willem Arondeus. I can barely imagine how scared he must have been at so many stages in his life - rejected by his family and forced to fend for himself; living hand-to-mouth; risking ridicule to live and love openly; then the moment when he finally decided that he wasn't able to sit down and shut up, that he had to do something; the bombing; the arrest; the moment he finally stood, alone. With a hood over his face. And knew he was going to die.

Bravery, it's been said, is being scared, and doing the right thing any way.

Their names were Willem Arondeus, Frieda Belinfante, Sjoerd Bakker and Johan Brouwer. They were heroes and I wish I’d known of them before now, but now that I do I want to be more like them.
***

Derek Farrell is the author of 5 Danny bird mysteries. “Death of a Diva,” “Death of a Nobody,” “Death of a Devil,” and “Death of an Angel” can all be purchased from the usual e-stores or directly from the publisher here. The fifth, “Come to Dust,” is available exclusively as a free download from his website .

He’s just delivered a sixth Danny Bird mystery and is going straight into a new book as otherwise he tends to fret.

Posted by Derek Farrell at 5:02 AM

A great story. Someone ought to write a book....

I’ve had to put them to one side til I’ve finished the projects on the desk, but this story is definitely on my To Be Written pile Thomas.