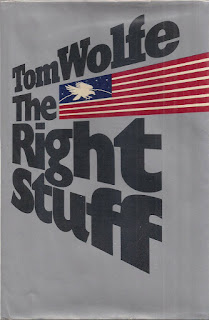 With yesterday’s anniversary of the Apollo 11 moon landing, I thought I’d take another look at the book that first got me interested in space. And honestly, I read it not because I was fascinated by space exploration, but because I was fascinated with Tom Wolfe. He of the narrative journalism and dazzling prose. He published The Right Stuff in 1979, and not only was is a serious piece of important journalism, it was a crackling good read. A novelistic read. It was the perfect combination of everything I love—in-depth reporting that takes you inside people’s heads and hearts, and the ability to do it in a way that takes you into the story as if it were fiction.
There are two things about that book that have stayed with me. First, the concept of “the pyramid,” where there is one person in a profession who rises above all others. Obviously that wasn’t original to Wolfe, but he used it extremely well to illustrate how the values in the space program changed over time—from hot-shot test pilots to careful scientists. And that brings me to the second thing. Wolfe notes that there was a point in the mid-20th century were you couldn’t board an airplane without the pilot having a very particular kind of drawl. It was a West Virginia accent that had filtered down from the top of the pyramid. Test-pilot extraordinaire Chuck Yeager was from that state, and his legend infused anyone who flew a plane. Pilots at every level started copying his drawl. Ever since reading that, I listen for it every time I’m on a plane and the pilot welcomes people aboard. I hear it more often than you’d think.
That’s the sign of reporting that makes you think and details so good they stay with you years later. Isn’t that the kind of great writing we all aspire to? And it remains particularly appropriate that Wolfe chose as his writing subject the beginnings of the moon shot—one of humanity’s greatest achievements. 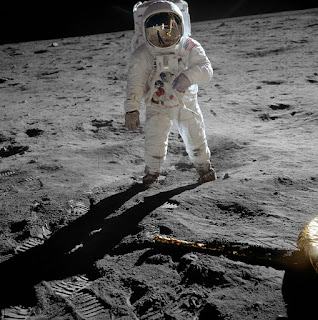