The Knott of Rejection 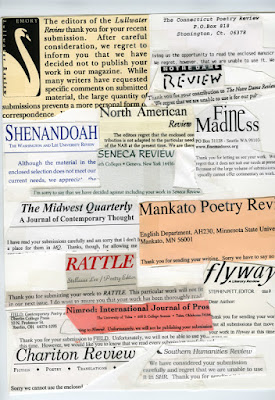 Throughout my education, I have many great teachers and one of the best was the poet Bill Knott (1940-2014). In an obituary in Open Letters Monthly said:


The intensity of our grief at an artist’s death should not be a measure of how widely their work was known, but how intensely it was loved, and by whom. Knott’s poems are and were a beacon to younger writers, a constant reminder that the innovative can be classically beautiful, and that on the page, the coldest anger can fire the mind.

I'm bringing up Knott because of how he embraced the rejection and criticism of his poetry. When Knott had given up on publishers (or was it the publishers giving up on him), he started self-publishing his own work. And these books usually included quotes critical of his work: "Bill Knott . . . is so bad one can only groan in response" or ". . . Knott seems to hate himself . . . and he seems to hate his readers".

Then there were collages of rejection slips and letters that he dedicated a blog to, a few hundred of the thousands of rejection slips i've got over the years—. The blog had the subtitle: "why I spent so much time trying to do something which the 20-30 pages below show I had no talent for, is a mystery to me—just more evidence (if any were needed) to prove what a futile waste my life was—" 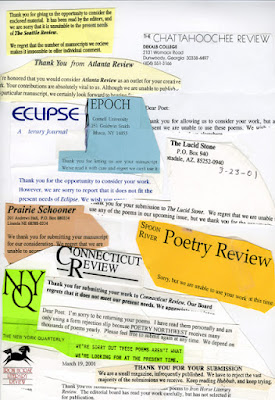 
You always wondered with Knott, but the mask never slipped. Elisa Gabbert, a poet who studied under him at Emerson, told me that she eventually came to believe that some of Knott’s pranks, like the anti-blurbs, were part of an elaborate performance: “It was kind of a goof, but that was his whole life. It was a really grand goof.” At the same time, she said, his anxieties about fame seemed utterly genuine: “He was just so suspicious of praise and of success.”

What I do know is that Bill Knott decided to own the rejections and the criticisms until they became a part of his work. As writers, getting rejected hurts, a bad review even worse. But we all have a choice either to drown in the negativity or embrace it as part of the job.
Posted by David Nemeth at 3:00 AM

“It was kind of a goof, but that was his whole life." What a great line.

Jason is currently not writing for a long list of prestigious reviews. said...

I once read that a yearly rejection letter goal can be a good thing for a beginning/novice writer. It is certainly proof that you are putting in the work.