Take me to the River (again) 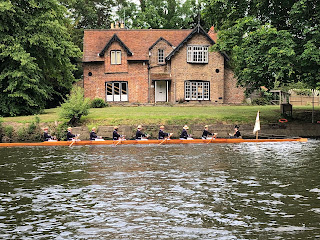 So I just finished a novella.

It’s a new Danny Bird story and Fahrenheit press commissioned it for their new Tete-Beche 69 imprint (they’ve been talking about it on the Socials, so I guess I’m allowed to share it here) and it’s going to be back to back with a new story from one of my favourite writers (and favourite people) Jo. Perry.

And the writing of my novella – which runs slightly longer than a novella (I know: Me being overly verbose! Whodathunk) – was an absolute blast. It was funny and fun and it brought me back to the early days when I wrote with no idea that publication was even a thing.

But then, when it was finished, I found my brain went into overdrive, like the act of focussing on the book had held me back from thinking for a few days (okay a few weeks cos I write slow and there were redrafts) about the state of the world, the state of my bank account, my father’s upcoming eightieth Birthday (happy birthday for yesterday, dad), the looming fourth anniversary of my mother’s death, a planned but not at all ready for visit by my brother and his family to stay with me for two weeks, a trip with my husband and my dad to Harrogate. Then there’s my birthday (yay me, I survived another year on the dumpster fire that is life today), a friends birthday, various events, gigs, the rise of the Far Right, Nazis, Homophobes, Transphobes, violence in the streets, the unshakeable feeling that the bullies and liars are winning again, and my ever widening waist.

Yes, I know most of the above list is nice stuff, fun stuff, stuff I should (and do) look forward to, and where it’s not, is tuff I’m sort of limited in my ability to influence, but my brain’s not wired that way. My brain is wired to stress, to fear, to find the opportunity to convince the rest of me that there is no joy in any of that list, to feel guilt at not fixing the world and anxiety at everything else.

And so when, in the middle of all that stressing, my best friend suggested we go boating, it put me in somewhat of a quandry. You see, he’s my best friend, and I want to spend time with him, but also: MY BRAIN IS ON FIRE, DUDE! I CAN’T ADD ANOTHER THING TO THE LIST OF STUFF BANGING  AROUND IN IT. ARE YOU TRYING TO KILL ME HERE?

So of course (because the fear of causing offense was higher than the fear of having a meltdown or – in fact – the fear of drowning, which is in itself, quite high), I said yes, and we went boating two weeks apart. 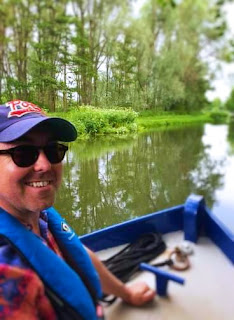 The first trip was a narrow boat on the Wey river. My friend C and I, along with four other students and a crew of three teachers – travelled along a glorious stretch of water with nothing but green fields filled with curious cows on either side. The Wey has a river / canal structure, and some hand-operated locks that meant I needed to learn to tie the boat up, operate the locks, and use the tiller to steer the vessel along. When I shared the photo above on Facebook with some comment about having been up the Zambezi people were actually convinced that such beauty had to be somewhere exotic.

The second trip was last Saturday. The two of us – C and I – hired a motor boat (electric motor, top speed of 4mph) and pootled (what? That’s a verb. Well it is now) from Datchet down past Windsor and Eton, pausing for a picnic at Dorney Lake (where the 2012 Olympic rowing competitions were held) and on to the fabulously named Monkey Island (an Agatha Christie location in waiting, I think) before turning around and pootlling back to our home base at Datchet. 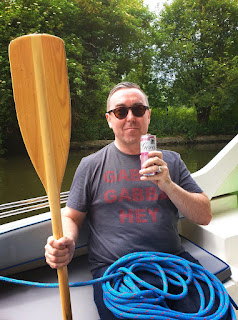 There was steering, low bridges, ducks, swans, herons, boats, boys, boys in boaters, and  there was – on both days – a need to focus, to see the river ahead, to check the bank for any immediate dangers – trees sticking into the river, sudden cuts or bends in the course that might hold crafts that would bolt out or alligators that could attack our vessel (kidding about the alligators) – and to be present, entirely, in the now.

Locks needed to be dealt with, ropes thrown, loops held, prows and sterns adjusted with the water flow. 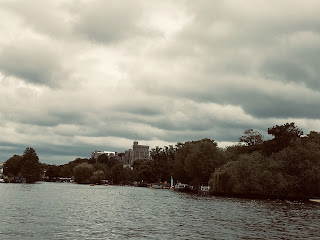 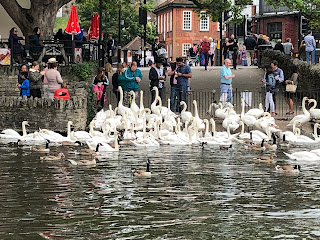 And – for those few hours – everything else went away.

I think, as writers, we’re probably conditioned to always have a billion plates spinning in our brains; to have day jobs and creative projects, to be aware of and (perhaps) disturbed by the world around us. I know I am (though whether that’s because I’m a writer, or whether I’m a writer because writing helps me make sense of these often overwhelming feelings I do not know). But I also think it’s really useful to switch off sometimes, to literally go sailing (or pootling, since neither of the two boats I was in had sails attached), and to focus on one thing, to let everything else go for a while.

I think – even though I’m back on dry land – I’mma try to keep that messing about on boats feeling going a bit longer. How do you all handle overwhelm? What are your secrets for not letting it all fry your brain? I’d love to know.

***
Derek Farrell is the author of 5 Danny bird mysteries. “Death of a Diva,” “Death of a Nobody,” “Death of a Devil,” and “Death of an Angel” can all be purchased from the usual e-stores or directly from the publisher here. The fifth, “Come to Dust,” is available exclusively as a free download from his website .

He’s just delivered a sixth Danny Bird mystery and is going straight into a new book as otherwise he tends to fret.