Scott's Note: S.W. Lauden guest blogs this week, the occasion: he has a new novella out called That'll Be The Day: A Power Pop Heist.  As the title suggests, the story has to do with music, rock, something Steve loves and is quite knowledgeable about.  He talks here about some of the books he's been reading recently on this favorite subject of his.

Much as I've fallen for crime fiction over the past decade, there are times when characters and plots from different books I’m reading run together. While that probably says more about my easily distracted mind than anything else, it usually means I need to take a break from the genre.

Lately, I’ve been devouring a lot of non-fiction about music, musicians and bands. Rock bios have long been a fall back for me, but my consumption increased dramatically when I got the opportunity to co-edit a power pop essay collection with Paul Myers (it's called Go All The Way and will be released by Rare Bird Books this October). That research also inspired my latest crime fiction novelette, That'll Be The Day: A Power Pop Heist, which I published last week. 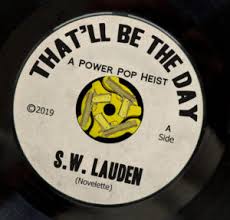 Since I’ve gone pretty deep down this particular rabbit hole, I thought I’d share a few recent rock reads with you:

Closer You Are by Matthew Cutter
Guided By Voices—led by lo-fi wizard, Robert Pollard—is one of my favorite 90s bands. Their songs are short blasts of poppy weirdness, the quality of which is stunning given the band’s staggering output. This book does a great job of capturing Pollard’s inspiration, dedication, and strange journey to becoming indie rock royalty.

A Man Called Destruction by Holly George-Warren
Alex Chilton is a mythical creature in my world. Still a teenager when he achieved commercial success with The Box Tops, he went on to join Big Star before exiling himself to an artistic wilderness of his own design. This book traces his life from teen stardom to living legend, and all his self-destructive detours along the way.

X-Ray by Ray Davies
Talk about your unreliable narrators. Davies turned the first half of his storied career with The Kinks into a cautionary dystopian tale in this peculiar autobiography. I highly recommend this one for fans of British Invasion music and a taste for the absurd.

Boys Don't Lie by Mary E. Donnelly and Moira McCormick
If you’re already a fan of Zion, Illinois, power pop legends, Shoes, this book is probably on your radar. If not, you should check out some of the band’s excellent music before you read this deep dive into their unique career. If there’s such a thing as a rock bio that’s the opposite of Motley Crue’s The Dirt, this might be it.

Your Favorite Band Is Killing Me by Steven Hyden
Ever wasted a few hours arguing about the Beatles vs. The Rolling Stones, or Blur vs. Oasis? Or listened to somebody else have those pointless, fevered (often drunken) debates? This book is that, and it’s pretty great.

Dear Boy  by Tony Fletcher
I’m a drummer and count The Who’s Keith Moon among my main influences. Which is why this book bummed me out. While Moon’s antics behind the kit and on the road were the stuff of rock myth, his personal life seemed pretty awful for him and those closest to him. Sometimes ignorance is bliss, especially when it comes to your heroes.

33 1/3 Series
This series of long-form essays built around specific albums is tailormade for music nerds like me. Some of my favorites include Freedom Of Choice (Devo) by Evie Nagy, 24 Hour Revenge Therapy (Jawbreaker) by Ronen Givony, The Kinks Are The Village Green Preservation Society by Andy Miller, and Radio City (Big Star) by Bruce Eaton.

S.W. Lauden is the author of the Greg Salem punk rock P.I. series including Bad Citizen Corporation, Grizzly Season and Hang Time. His Tommy & Shayna novellas include Crosswise and Crossed Bones. A new novelette, That’ll Be The Day: A Power Pop Heist, was released on June 18, 2019. S.W. Lauden is the pen name of Steve Coulter, drummer for Tsar and The Brothers Steve. More info at http://swlauden.com.

Thanks for having me back, Scott. Always an honor to blab at DSD!