Blood on the (French) Tracks

You never know what you're going to get when a non-crime fiction writer takes a turn at what is essentially a crime novel.  Is the writer going to take an attitude of superiority towards the genre?  Will they keep things tight in the way a crime novel usually needs to be, and will they try to generate suspense?

I had these thoughts in mind when I picked up Marguerite Duras' novel L'Amante Anglaise recently. 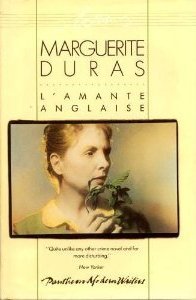 Now I happen to like Duras very much as an author, and I've read a number of her other works.  In her books, which are always short and written in a spare but remarkably moody prose, you get emotional intensity to the max. But it's fair to say she doesn't tell stories reliant on plot in the way you'd associate with typical crime fiction.  Passion and lust run deep in her books, so the material is absolutely there for a crime tale, but Duras was never interested in the kind of linearity most crime tales take.

Yet here's some of the back cover copy from  L'Amante Anglaise: "A brutal murder is committed in a small town in rural France.  The dismembered corpse is dropped in pieces from a railway viaduct onto trains passing below.  The victim was a deaf-mute; the killer, her cousin Claire, may or may not be mad.  Claire, her husband, and a friend gradually reveal the story behind the crime."

As is clear from this, the book is not a whodunnit but, in essence, a whydunnit.  And it happens to be based on actual events that happened in France in the late 1940's, when parts of a corpse, without the head, were found in various train cars that eventually were linked to one viaduct all the trains with those cars had passed under.  As the back cover copy states, the book proceeds in three sections, with a  never named interviewer (basically the book's detective) talking to three major players in the drama: first, the owner of the town's local bar, then the murder victim's husband, and finally the killer herself.  It's a procedural for several voices, a crime novel told in dialogue, and as the conversations proceed, circling around certain events, jumping ahead in time then going back in time then forward again, the book becomes riveting.  It's a mixture of revelations and nagging questions, assumptions and enigmas.  And it goes without saying that in a story where you know who did the crime, the biggest mystery of all is the one that's most pressing anywhere you go -- the mystery of the human personality and what makes people act as they do.

L'Amante Anglaise is vintage haunting Marguerite Duras but also something unusual for her in its outright starkness and its matter of fact brutality.  I enjoyed it a lot. Here's a non-crime fiction author who wrote a crime novel with a feel and tone that could only be hers and that, at the same time, really works as a crime novel.