Year of an Indie Writer: Week 20

It's all in the details.

Proofing the Hardcopy of Aztec Sword


Always, always order a hard copy of your books printed by Amazon.

When you create a paperback via Amazon (or IngramSpark), you are provided with a template. On the template are the bleed areas and the bar code space. It is incumbent on you to design your cover with those lines and boundaries in mind.

Amazon also has a great online viewer where you can proof your book electronically. It's good, because it has all the borders marked. But sometimes, you just need the paper. 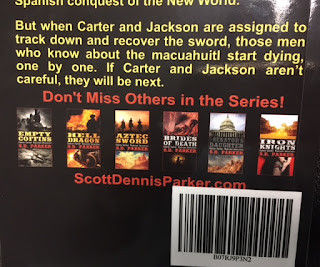 That's all on me. I got this text as close to the bar code as possible in my design program. Clearly, I got it too close. The spine's text also was misaligned, so I've got more than one thing to fix.

The interior is good. Vellum is a good program that takes care of all the little details so you don't have to. It also makes ebooks, so this is a key piece of software for any independent writer.

Oh, and Amazon now puts this banner across the whole cover. 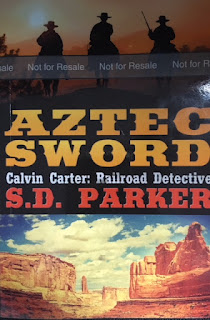 The End of The Big Bang Theory


Strangely, I didn't watch this show out of the gate. I don't hardly watch anything live at 7pm CST. But when it finally landed on my radar, the family and I bought the DVDs and caught up. Ironically, we didn't watch live, but we watched both episodes on Thursday.

For many of these long-running shows, the characters face some big change and move out of the apartment or bar or whatever. But what I loved about the series finale of TBBT was that we now know things will continue just as they have for the past twelve years...we just won't be seeing their lives. Babies will be born, children will grow up in this wonderful make-shift family, and they finally have a working elevator. Come on. That's not a spoiler. You knew going in the thing would finally work.


I love being a geek who has seen very little of this series. It just didn't do it for me. My wife enjoys it and, up until this month, always watched the shows via binging when HBO offered a week's worth of free programming. But for Mother's Day, I bought her HBO so she could watch the end live.

And I actually sat in for most of last week's episode. I'll also tune in tomorrow live. I think by Sunday, I'll have watched something like six or seven full episodes. With my wife's running commentary, I get caught up.

As a Star Wars fan who loved The Last Jedi and groused about those fans who signed petitions trying to get Disney to remake Episode VIII, I rolled my eyes this week as GOT fans wanted a do-over of this season.

I can imagine one day we'll have some famous author write a blockbuster book and they'll be fans demanding the publisher re-write it to their tastes. Sigh.

Always Have an Answer


Last week, at Houston's Comicpalooza, a friend of mine asked me why I haven't written any genre stories that would find a home at a geek convention. It was an honest question and one to which I didn't have a good and ready answer. I fell back on my humorous answer as to how I came up with my western hero, Calvin Carter: Growing up a SF geek kid, I discovered mystery fiction as an adult, so naturally I ended up writing a western.

It prompted me to examine my writing to date and I arrived at an answer: I enjoy writing thrillers, mysteries, and westerns.

But I think I'll be trying my hand at some SF before year's end. It might even be this summer.


Blockbuster. It's fantastic. It is an immersive podcast, completed scripted like a radio show, about how Steven Spielberg and George Lucas, with John Williams, created their massive films of the 1970s. How good is this series? When Lucas and Spielberg face challenges to their productions, you can't help but be worried for them...and we KNOW the answer! Check it out.

Book of the Week


Marvel Comics: The Untold Story by Sean Howe. I bought this on Audible when it was a daily deal, but highly recommended...and I'm not even finished.

Song of the Week


Could it be anything other than the second single from Bruce Springsteen's new album? Just listen to the lush orchestration. And the chimes!