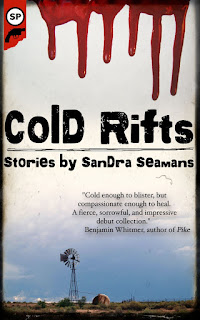 Sandra Seamans, one of the anchors of the crime fiction community, passed away in her home in Clifford PA on May 23.

I found out earlier today, when I went to Sandra’s blog, My Little Corner, to see if she had any new publishing opportunities to share with us. Her last post came on May 16. I had reacted to previous silences by sending her an email and asking if she was okay. Usually she reported computer trouble or a period of illness. If I remember correctly, she had a spell of difficulty after Superstorm Sandy that prevented her from posting.

But one silence came after the death of her husband in 2015. According to her obituary, she had been unable to return to her own writing since her great loss, but she kept seeking out new opportunities for us. Since I trace about ninety percent of my successes with short fiction to information from Sandra, I like to think the benefits of her efforts went both ways. If giving to the writing community helped her in her grief, that would be entirely characteristic of the Sandra I knew.

I knew her online only. We never met or spoke on the telephone, and I don’t believe she attended conferences or joined writers’ organizations. But a thoughtful, generous woman came through in the opinion pieces she posted on her blog. Over the years she acquired a large body of knowledge of the publishing industry, including its bad actors. Nothing aroused her ire faster than the exploitation of the writers she considered under her care.

Sandra specialized in short crime fiction. She once told me of an agent who sought her out and asked her to send him a novel to consider. She declined with thanks. In my Kindle I have a copy of her short story collection Cold Rifts, which I am told is now a collector’s item.


I will treasure it along with the memory of its author, gone too soon.
Posted by Steve Weddle at 5:00 PM

I am shocked and saddened to hear of Sandra's passing. I had no idea until I saw this post. I've known Sandra since 2007. (It's still difficult to talk of her in the past tense.) She was tireless, and one could set a watch by her. Since she founded My Little Corner, I've used her site and sent clients there. When I "came out" as Anonymous-9 about a decade ago, Sandra broke the news in a story on the site. In many ways, Sandra was kind and helpful to me. Thank you, Albert Tucher, for this memorial piece. She will be missed. --Elaine Ash

Albert, you said it all perfectly. Like you, I never met Sandra but I felt as if I had. I was a regular visitor to her Little Corner and frequently followed up on opportunities that Sandra noted. I always tried to thank her and remind her of the great service she provided - but she deserved so much more than I could write in a brief reply. Sandra was a very special, giving person and I thank you sir for writing this tribute to her.

Sadly, I never met Sandra, even though I am also from Pennsylvania and occasionally thought about trying to look her up. I knew her solely through her wonderful blog which provided me with 90% of the markets that I've been able to crack. I was sorry to hear of her troubles and hardships, but I am richer for having used her expertise. She will be missed by the short mystery field.

What a terrible shock.
I also relied on Sandra's blog for market news, and I had noticed that the site hadn't been updated in about two weeks, but I didn't know why.

My sympathy goes out to friends and family. I never met Sandra, but thanks to her, many of my stories found homes.