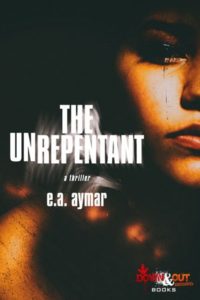 From the first line THE UNREPENTANT grabs the reader’s attention and does not let go.

Outside Baltimore, quiet army vet Mace Peterson witnesses the abduction of a young girl. Unable to ignore someone in trouble and relying on his military training, Mace intervenes, freeing the girl from her captors.

However, the girl is stronger than first believed. Eighteen-year old Charlotte Reyes is a runaway, having already escaped an abusive home, she has been tricked and unwittingly taken across country. Victim of a sex-trafficking ring.

Having evaded the immediate threat, both Charlotte and Mace face far more danger as the criminals behind Charlotte’s suffering continue to track them down.

The depth of these characters draws the reader in deeper and deeper.

Mace, despite his army past, is fragile and unsteady, struggling with divorce and a family history of mental illness and suicide. Charlotte is a clever, but hardened ass-kicker, who has learned to take care of herself and looks forward to serving up revenge. They are both haunted, tortured characters, alone and lost.

Charlotte Reyes is a truly original character and Mr. Aymar has written her beautifully. A fighter. A survivor. Her strength is physical, emotional, and mental. The holy trinity. Capable of doing what it takes to endure, the reader watches as she manages the abuse she is given. Ceding at times, but never giving up. Surrendering only so she might live another day.

THE UNREPENANT also presents the reader with several absolutely disgusting antagonists. Brothers looking to make a buck and stay away from their own abusive family. A crooked cop used as muscle and speed. And the predatory, greedy, and often violent leader Barnes, who decides the fate of everyone involved.

This story, in the hands of any other author, might turn bleak or succumb to hopelessness.

Written as a thriller, but far deeper and more emotional, this is a story of courage and compassion. Revenge. Aymar seasons the tale with enough dark humor to alleviate the overwhelming weight of the subject manner. He neither downplays nor embellishes the violence and abuse, but offers it as a terrible truth. Each word flows to tell a multilayered tale that will sit with you for a long time to come.

“Charlotte’s experiences, while not unheard of, are exaggerated for dramatic effect in THE UNREPENANT. Most women don’t come to prostitution the same way she does (although some do), but the suffering and subsequent trauma are often similar. And while this is a thriller and a work of fiction, I certainly didn’t want to employ suffering as a plot device or diminish abuse. I wanted Charlotte’s pain to reach you, like a hand stretching out of the pages.” – E.A. Aymar

THE UNREPENTANT is a brutal and unsettling story. A hardboiled and gut-wrenching read.


E.A. Aymar appears monthly in the Washington Independent Review of Books, and he is also the Managing Editor of The Thrill Begins, ITW’s online resource for aspiring and debut thriller writers; he also serves on the Board of ITW as the Vice President of Author Programs. In addition to ITW, he is a member of the Mystery Writers of America and SinC.Ed also runs the Noir at the Bar series for Washington, D.C., and has hosted and spoken at a variety of crime fiction, writing, and publishing events nationwide. He was born in Panama and now lives and writes in the D.C./MD/VA triangle.

Other titles by E.A. Aymar 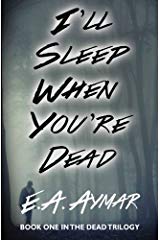 You're As Good As Dead As Co-Editor with Sarah M. Chen and Contributor

Posted by Marietta Miles at 5:38 AM