Down to the River Anthology

Remember when a fire broke out on the Cuyahoga River, near downtown Cleveland.  Smoke on the water, not only in a song, but in real life.  This was, last time it happened, in 1969.  And it was not the worst such incident; the Cuyahoga had gone up in flames many times before that, including the even bigger conflagration in 1952.  The reason each time was related to the oil-soaked garbage and debris floating on the water's surface. In 1969, as a case in point, sparks from a passing train landed on that oil and set the flames going. 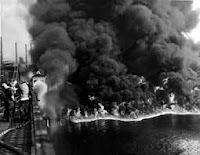 In 1969, I was seven years old, but I remember the story of the burning river well.  It sounded weird. How could water burn?  The story was all over the news, in print and on TV.  And, let's face it, an event like that you don't forget.  As a kid you wonder, what could human beings be doing to make a river so polluted that it does something entirely unnatural?

The Cuyahoga may have been the most extreme example, but the 1960s and 1970s were a time when a number of rivers were polluted.  If you grew up in New York anywhere near the Hudson (as I did), you were aware of how chemical-filled, how toxic, that river was.  For years, companies such as General Electric dumped PCBs in the water, and there was also mercury contamination and towns and cities dumping untreated sewage into the Hudson.  This is the time when the peregrine falcon population in the Hudson Valley was decimated. One reason: the falcons, which nested in cliffs above the river, would eat the fish that had ingested the chemicals they swam through, and the PCBs in the fish caused the falcons to lay soft and unviable eggs.

I say all this as background to why I was happy to accept an invitation to contribute to a short story anthology that just came out.  It's called Down to the River and it's edited by Tim O'Mara. It's a collection of twenty-two crime stories that take place on or near an American river, and proceeds from sales will go to the conservation non-profit, American Rivers.  As someone who grew up when rivers in the United States were in terrible shape and likes how much they've been cleaned up since while recognizing that the conservation work must go on (because, always, there is more to do), I couldn't say no to Tim when he asked me. 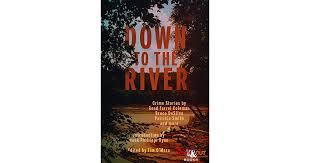 "Write about a river you're familiar with," Tim said.  "But not the Hudson. That's too obvious."

After a moment's thought, I came up with another New York City river to write about, the Bronx River, which flows south from Westchester County down through the borough it's named after.  It cuts through the heart of the Bronx Zoo, a favorite place of mine since childhood, and I figured I could set a good story there.  Anyway, the story is titled "Bronx River Elegy", and who can complain about being among such contributors as Reed Farrell Coleman, Hank Phillipi Ryan, Eric Beetner, Charles Salzberg, Dana King, John Keyse Walker, and many more?  Among the rivers the stories revolve around: the St. Croix River in Minnesota, the Alleghany River, the Missouri River, the Connecticut River, the Dan River in Virginia, the Mississippi, and the Los Angeles River.  In other words, there is much geographical variety in this collection, though of course, you can be anywhere for crime to occur.

Down and Out is the publisher.

Anyone want to take a dip?

You can get Down to the River here.

Picked this up yesterday.