Year of an Indie Writer: Week 9

Sometimes, the little things are the most difficult.

Evolution of a Book Description

Writing a book description is difficult. I can write a 50,000-word novel with little effort yet to come up with a 300-word description *that doesn't tell the whole story*, well, that's an art. are the three drafts (that made it onto the computer. There were more on paper.)

Outlaw Angus Morton and his gang have made a crucial mistake: they upped their antics from robbing stagecoaches out west near El Paso, Texas, to murdering a railroad agent and burning down a way station. with bringing justice to Morton.

Along the way, Carter meets beautiful Laurel Peel. She’s running from an arranged marriage, but when she’s kidnapped from a train right under Carter’s nose, he discovers the secret documents she hoped would earn her freedom. The papers reveal a machine that beggars belief: a machine armed not only with a Gatling gun but a means to shoot fire.

But Carter must push aside his curiosity about the enigmatic Peel and locate Morton. The people of El Paso fear Morton and when he might strike next. Rumors float about a fire-breathing dragon capable of utter destruction.

As a former actor, Carter knows a tall-tale when he hears one. He also understands the reality of death. Every person who witnessed the most recent attack is dead, except for the fetching reporter Aurora Ashe.


------
Not bad, I thought to myself. One you're supposed to do with trailers is the reader's appetite and not give too much away. I included a few key phrases that would have drawn me in as a reader--"secret documents"; "kidnapped from a train"; "Gatling gun".

I changed a few words to tighten things up.

Outlaw Angus Morton and his gang have made a crucial mistake: they upped their infractions from robbing stagecoaches near El Paso, Texas, to murdering a railroad agent and burning down a way station. with bringing justice to Morton...

En route Morton's last known location, Carter meets beautiful Laurel Peel. She’s running from an arranged marriage, but when she’s kidnapped from a train right under Carter’s nose, he discovers the secret documents she hoped would earn her freedom. The papers reveal a machine that beggars belief: a machine armed not only with a Gatling gun but a means to shoot fire.

Pushing aside his curiosity about the enigmatic Peel and the strange contraption, Carter focuses on finding Morton. The outlaw has the citizens of El Paso terrified, wondering where next he'll strike. Rumors abound a fire-breathing dragon capable of utter destruction, a monster which could lay waste to the city.

As a former actor, Carter knows a tall-tale when he hears one. But when witnesses to the most recent attack turn up murdered, Carter must confront his doubts. Maybe there is something to those rumors. A local newspaper reporter thinks so, and she's out to prove it. But when Aurora Ashe puts her life on the line, Carter comes to her rescue. But who will rescue him when he comes face to face with..the Hell Dragon.

Then I got some outside feedback. My wife has the unique way of cutting through all the stuff and getting to the core of a problem. She quickly said there were too many names and too much story. Okay, I said, maybe I can just remove all names except Morton and Carter. And tell less story.

A co-worker of mine at the day job read Draft 2. She took home a printed version and returned with the sheet full of notes. And questions. Valued questions for which I mostly had answers. But the mere fact she posed so many questions also meant the description was not doing its job.

The sole job of a book description is to hook the reader and compel them to buy the book. Or , at least download the sample and read it. description was flawed.

Outlaw Angus Morton and his gang have made a crucial mistake: they upped their crimes from robbing stagecoaches near El Paso to murdering a railroad agent and burning down a way station. with bringing Morton to justice.


When Carter arrives at Morton's last known location, he finds the town on edge. The bandit has the citizens terrified, wondering where next he'll strike. Even stranger are the rumors of a fire-breathing creature capable of utter destruction, a monster which could lay waste to the city.

As a former actor, Carter knows a tall-tale when he hears one. But he also knows a few things are not make believe:

Witnesses to the most recent up murdered.

And the deep, metallic churning sound of an infernal machine approaching...


-----
That's what I went with. It has way less story. Actually, it only has the part of the plot that gets Carter and his partner out to El Paso to investigate. All the other stuff is still in the book, but now, folks will see how they all fit together while reading the novel.

Is it the best description? Probably not. But then again, the great part about being an indie writer is being able to adjust on the fly. If HELL DRAGON doesn't sell well, then perhaps there's a problem with the description.

Or the cover. But as soon as I found that upper image, I knew it was going on the cover.

Speaking of cover, here it is. 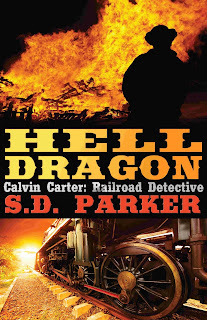 Speaking of doing things on the fly, I had forgotten how soon before 1 Jan 2019 I delivered the files for EMPTY COFFINS to Amazon. It was probably around 27 Dec. Here's the weird thing: December has 31 days in it. Not sure you knew that. Came as a shock too. So when I uploaded the Amazon file of HELL DRAGON on 27 February, the book would go live not on 1 March but 3 March.

So, Amazon folks, wait until Monday, 3 March, to snag your copy of HELL DRAGON. It's available for pre-order, so make your Monday marvelous with the new book.

And, looking to the future, I've just learned April has only 30 days, so have the file of AZTEC SWORD up and ready well before 1 May.


I have been a Star Wars fan since 1977. I've loved, to a greater or lesser degree, every movie since. Star Wars has been an integral part of my life. I'm a founding member of the Star Wars Generation.

Topher Graceyes, that Topher Gracehas drawn content from all 10 live actions movies to present an overarching trailer of all of Star Wars to date. Have a look.

Not only does this trailer to justice to the greater story, it is emotional. Goosebumps rippled over my arms and neck when I hear Yoda's "There is another" comment and it's the fantastic scene from The Force Awakens when Luke's vaults into Rey's hands.

So very, . A perfect way to ready ourselves for this year's Episode IX

Speaking of Star Wars, I had a hankering to watch Rogue One again. I went to Netflix, but . Enter Half Price Books. Armed with a new -ray DVD, I watched this show again, the first time since it's debut in 2016.

does it hold up well. It's a true war film in the Star Wars universe. Like all real-life heroes who know the thing for which they fight is larger than themselves, the actions of and company are commendable.

The movie even made me tear up over a robot.

And that Darth Vader scene? The one thing I really hoped for going into the movie back in 2016 was to have Vader be bad again. . And dang, if he didn't deliver.

If you haven't watched it in a whileor evertreat yourself.

I’m a member of the Men’s Adventure Paperbacks of the 70s and 80s. So is James Reasoner. He posted on this group the cover of the new book he’s publishing: Faraday: The Iron Horse. Well, the cover alone grabbed me. The concept solidified it. And the reading, so far, is exactly what I expect from James.

Here’s the link to his blog where he gives background. I’ll have my review up next week (most likely).
Posted by Scott D. Parker at 1:00 AM