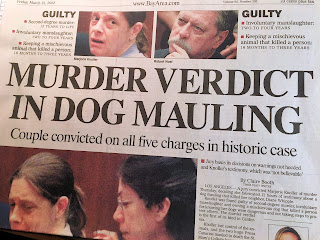 I remember this case well but hadn't thought of it in years. Such a tragedy, and so many interesting details.

I followed this one, but never knew so many of these details. It was a scary case, and very polarizing. I remember the victim being blamed for being on her period, not defending herself, anything to allow jackasses who can't control their animals to keep owning them in apartments. I was satisfied by the verdicts.

These sociopaths deserved the harsh sentence. They had no remorse at all.