Year of an Indie Writer: Week 4

One of the best things about being independent is the ability to change on the fly.


Ever since I read this post by Dean Wesley Smith, “No One Cares,” I’ve been giving it some thought. It’s churned around in my brain, off and on, for two weeks now. And it’s allowed me the freedom to change—potentially—my publishing schedule for the year.

What I’ve said from New Year’s Day on is that this is the year of Calvin Carter. Yes, I will be publishing at least the five novels I’ve already written. Each of these six books will be published on the odd-numbered months. EMPTY COFFINS on New Year’s Day. HELL DRAGON on 1 March.

But what y’all didn’t know is my plan for the even-numbered months. I had a whole other schedule planned out.
What I realized this week—early on, actually—was that I wasn’t ready for 1 February. At least, not for a novel.

So I’m preparing a couple of short stories. They are modern crime fiction featuring a character named Anne Chambers. She’s a homicide detective for the Houston Police Department. One of the stories was originally published as part of Do Some Damage’s COLLATERAL DAMAGE anthology (2011). The latter was originally published at David Cranmer’s Beat to a Pulp blog. Now, they are paired together in a short collection.


In other words, when you are an independent writer and publisher and you haven’t made public your schedule, you can do whatever you want...because your company is agile.


I’m a member of Western Fictioneers, a writing group dedicated to western fiction. I’ve been a member since the group’s founding in 2009. We are a great group of folks who read each other’s works and collectively promote western stories and books.

We also help each other figure out how to promote our stuff and share marketing techniques. No matter how your stories are published, you simply must do the lion’s share of your own promotion. It is a constant learning process. For some, this process can be frustrating. For me, it’s a challenge, but one I actually enjoy. As much as I would love for there to be a “set it and forget it” solution, there simply isn’t one.

I’ve been on Instagram for a few years now, but did nothing other than follow a graphic designer friend of mine, Mark Hamill, Neal Adams, and Kevin Smith. But after reading an internal Western Fictioneers email thread, I’m turning back to Instagram. I even uploaded my first...post? What do you call individual Instagram posts? Who knows? But I did it. And I plan on doing it more often in 2019.

DEAL OF THE WEEK...AND ANOTHER LESSON


Do Some Damage alumnus, Kristi Belcamino, has a terrific deal.

I’ve subscribed to her newsletter for a few years now. She has forged ahead as an independent author and she is rocking it. She’s got her newsletter, her Facebook group, and her video channel where she talks about books, her own works, and the utterly charming “Coffee Talk Puppy Talk” series. You should subscribe to her channel. She’s at 95 subscribers as of yesterday. Let’s get her to 100 this week.

She’s got six books in her Gia Santella Crime Thriller series. With those six books, she has lots of options for promoting and selling them. And as of today, you can get all six books...for $0.99. 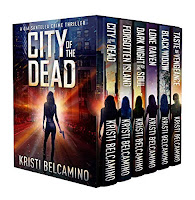 A dollar! Six books. Are you kidding me? You should buy that on principle. It’s a remarkable deal. Over 1,000 pages of crime fiction. And, as of today, she ranks as #1 in her fields. That’s how you marshal your books to your advantage.

If you are not following Kristi, you should. She’s a leader in what you can do as an indie writer.
Website
YouTube


ALBUM OF THE WEEK


I’ve got an early favorite for my song of the year.

When it comes to melodic hard rock and metal, Frontiers Music is leading the charge at keeping legacy acts in the public eye while showcasing new artists. To start 2019, they have a free sampler when you join their email list. It’s a list of twelve tracks by bands I’ve never heard of (save one: One Desire).With a hashtag of #RockAintDead, how can you go wrong?

If you like hard rock with a melodic edge, go now to this site, sign up, and download this music. It is really, really good. How good? There’s not a bad song on this sampler. And how about this: I’ve already purchased two albums by artists featured on the sampler. One Desire’s self-titled debut and ALL RISE, an album by the band Perfect Plan. Both of these bands sit right in that wonderful pocket of taking old songs and styles and making them their own.

It is “In and Out of Love” by Perfect Plan that I find myself singing while washing dishes or folding laundry. Want to hear it?

Email ThisBlogThis!Share to TwitterShare to FacebookShare to Pinterest
Labels: craft of writing, year of indie writer

Scott, I've loving your ... as an indie writer series this year. And I couldn't agree more about Kristi Belcamino. She's rocking it!

I miss that freedom (not that I'm locked down with a contract or anything) and I think taking your time with stories makes for better stories.