I am honored that Scott Adlerberg graciously asked if I could write an article for him for today’s Do Some Damage. Specifically, he asked me about my approach to writing in regards to the variety of styles, tones, characters, etc.

I thought this was going to be an easy topic to tackle, but thinking about my approach opened a lot of issues, like how did I get here and what is the point of writing crime fiction? I ramble a little below but give a little insight to my muddled mind. 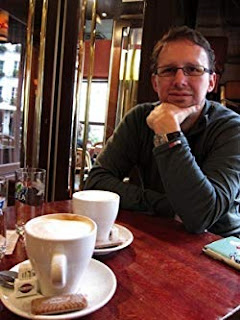 When writing a story, my main goal is to have an impact on the reader. Whether the goal is emotional devastation, rays of hope, thoughtfulness on an issue, or humor, I try to find the best medium to get the point across. Years of reading “literary” fiction in my twenties made me into a crime fiction writer. This is not to say I didn’t read some great works back then, but I often read stories where the unhappy protagonist burdened by the weight of the world went through their unhappy day(s) unchanged through the end. The writers of these stories often had elegant prose and a unique perspective on an aspect of life, but the repetitive ennui (a fancy word I don’t know how to pronounce) left me exhausted, indifferent, and ultimately forgetful about a story that I spent time reading.

As a writer, I don’t want to do this to anybody. Readers have invested their time and possibly money so that I can ferry them into another world for five minutes to several days. When they finish, I hope the story stands out like a destination vacation to the Caribbean or Paris, and not a routine trip to the grocery store to buy eggs and bread.

When I encountered crime fiction in my mid-thirties, something clicked. Lives changed irreparably between the pages, and characters were pushed to their limits exposing their true selves. Readers endured an impact based on dire situations that resulted in memorable stories. It was a world that dealt with hard consequences for previous actions and sometimes countered with powerful reactions. These were not worlds where a shrug and a sigh were the entire point. Online short fiction and crime magazines exploded in between 2008ish and the early 2010s. Sites and publications like Twist of Noir, Spinetingler, Plots With Guns, Needle, Thuglit, Shotgun Honey, and All Due Respect delivered hard hitting tales. I studied several short story crime writers including Matthew Funk, Todd Robinson, Patricia Abbott, Tim L. Williams, and Jordan Harper, among others, to learn how they compressed words and packaged explosive situations into an impactful, memorable reading.

So when it came time to submit, I wanted to stand out in venues full of amazing talent. I played with styles that would most effectively drive a point home. This can be through point of view, an absurd take on a serious issue, or a character who demands attention and must have their voice heard.

My crime fiction stories switch from comedic to serious to action-packed adventure. In the movie world, both Billy Wilder and the Coen Brothers created noir masterpieces one year and followed it up with a slapstick comedy next. I see less breadth in the writing world. It seems a writer must stake a claim to a certain style and stick to it. I believe I lost part of an audience I had built with a sensitive coming-of-age tale in my novella Lost in Clover when I followed it up with a hyper-violent and profane comedy Keeping the Record. Perhaps that wasn’t the best move. (I’m still learning.) The short fiction community, however, seems to be okay with radical changes in voices, tone, and style. Thank you!

Short fiction also gives me room for experimenting that wouldn’t go over well in longer fiction. “Here’s to Bad Decisions: Red’s Longneck Hooch” is the story of a man’s downfall through a beer ad. “Because” documents the reasons a young man becomes a criminal (and the consequences) with each paragraph giving three reasons for each fatal choice. In both of these stories, I’m not sure a reader could endure 50,000 words of text in either of these styles, but 700 and 1000 words deliver the maximum effectiveness. I’ve written a few stories in second person present tense, which I ‘d argue is more authentic than first person past, but that’s for another day.

Most stories I write in typical first or limited third person in past tense, but I love the immediacy and unpredictability of present tense. The characters and their stories ultimately determine how they get told. I often start with a vague idea of a person doing something and what would happen next, or sometimes it’s an issue that bothers me and I want to explore it through fiction. I’ll start in one direction and then reverse course. I’ve started in the middle then worked to the beginning and then put on the ending. My poor writing group sometimes gets drafts from me where I’ve changed the POV, tense, or gender part way through the draft and tried to clean it up miserably. I’ve changed stories based on rejections, and they’ve often become better for it.  Most of my flash fiction begins several hundred words over and then through several drafts I take out everything that doesn’t matter. I also believe flash fiction shouldn’t be just a scene, but should have a beginning, middle, and end.

I like challenges and restrictions as they force creativity within an area. Themed anthologies is something that does that.  But sometimes they almost drive me crazy. Holly West invited me to write a story in her upcoming Go-Go’s anthology. When she was coming up with the concept at the California Crime Writer’s Conference, a writer looked up and read aloud the titles of all the Go-Go songs from Wikipedia. When “Johnny Are Queer?” came up (never recorded, but played in their live set) another person said nobody should touch that story. I knew in that moment I had to write it. I did, but it took a lot of work to get the story right, balancing controversial issues. I remember thinking more than once, why didn’t I go for “Our Lips Are Sealed?”

Anyhow, if you’ve made it this far down, thank you for taking the time to read this. I hope you can find my fiction that’s out there or in my latest collection Bloodshot and Bruised: Crimes Stories from the South and West. (See what I did there?) Thank you and Happy Holidays. 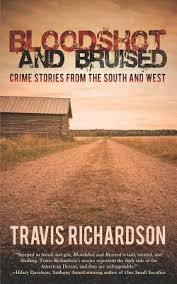 You can pick up Bloodshot and Bruised: Crime Stories from the South and West right here.
Posted by scott adlerberg at 3:00 AM

Congrats on the publication of your latest collection of crime stories. As you point out, with short fiction you get to experiment in style and theme, a chance to be truly creative.