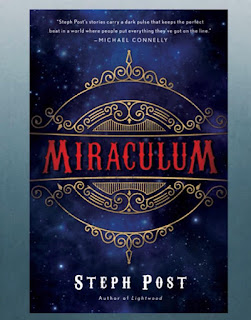 Miraculum at Amazon
Miraculum, the new Southern gothic fantasy from author Steph Post, debuts January 22. Pontilliar’s Spectacular Star Light Miraculum moves through the south, filled with strange attractions and stranger people. When a charismatic new freak joins the menagerie, unlikely and dangerous events begin to happen. Ruby, carnival owner’s daughter and resident snake-charmer, attempts to discover the stranger’s secrets and further understand her own.
Post, previously known for the literary crime novels A Tree Born Crooked, and the Judah Cannon series Lightwood and Walk in the Fire, is dipping further into the magnetic darkness and creating a tale of magic. 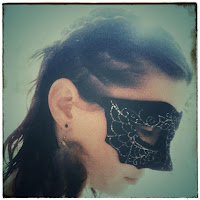 Steph has seen success with her Florida Noir novels and her striking short fiction. You can check out her shorter tales in Haunted Waters: From the Depths, Nonbinary Review and the anthology Stephen King’s Contemporary Classics. Her work has been recognized with a Pushcart Prize, a Rhysling Award. In the midst of her well-deserved success she still dances on the edge and takes chances. It’s exciting to see someone break away from the expected and try something new and different.

As the release of Miraculum approaches, Steph Post talks to Do Some Damage.
☾☾☾

· How long has Miraculum been hanging in your head and how long have you actually been working on her?

Oh wow- so, I wrote a ‘prototype’ version of the novel as my grad school thesis back in 2010. Then, after 2 published novels, I went back and completely wrote the book from scratch in 2016. It took me about 10 months to write.

But yeah, I’ve been thinking about carnivals since about 2009.

· Were you fascinated by carnivals as a child?

Actually, I don’t think I ever even went to a carnival as a kid. So, it’s more what they represent. As a kid, I was always fascinated by wildness, magic, the unseen world, things unexpected or subversive.

A carnival sort of encapsulates all of that, but with a dark, seedy side, too. And that side was always lurking in my childhood as well.

A carnival is like the ultimate symbol of an imagination let loose and allowed to be both raw and free.

· Miraculum is a bit of a departure for you, were you or are you nervous about this jump? Was your publisher supportive?

I’m really excited, actually. The book I’m just now starting to write is much more like Miraculum than my Southern crime novels. I’m ready for readers to see this different side of my work, especially since it’s the direction I’m heading in.

And yes, Polis Books was/is super supportive of all my work, regardless of genre. It’s been a great experience to have a publisher who embraces all that I do.

· What can you tell us about your current work-in-progress?

So, I just finished the third and final Cannon book, wrapping up my Southern crime trilogy. It will be out in 2020. And I’m just now getting started on a new novel set in the 1890s. I’m still in that ‘discovery’ phase of the book though, so I don’t want to say too much. It will be another genre departure for me, I think, but still with my same style.

· What keeps you inspired during the creative process?

Oh, music! I’m trying to think back... I can only listen to instrumental while writing. Several scenes were built from closing my eyes and putting my headphones in, laying on the floor with a song on repeat.

There’s a particular scene I built around Hans Zimmer’s track ‘Coward’ from Interstellar. I’ll never be able to hear it without seeing that scene play out.

There were a ton of soundtracks from Trevor Morris, too. I’m determined that he will score the film version of Miraculum

And inspiration boards...
This is the ‘Miraculum’ part of an ongoing book board up in my studio now. These are some of the pictures that were on my original board for Miraculum: 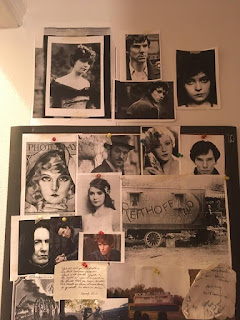 These relate to characters, though these aren’t actors to play them necessarily. It’s more about certain looks. I’m so visually centered when I write. I see everything in a cinematic view. So, the photos remind me of a certain look, which translates to a feeling that is something I wanted to capture- in a completely different context- in the book.

Though if Benedict and Eddie Wanted to play roles in a one-day film version, I wouldn’t complain.

Posted by Marietta Miles at 7:16 PM