It's a risk doing a NaNoWriMo post, because I've never done NaNoWriMo, and I can't see that I ever would^. As the writers who are invested this year enter day 5, I'm already seeing the usual threads about discouragement. 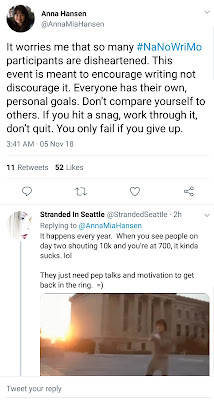 Now, I could pop up tweet after tweet from discouraged participants about what's getting them down, but one example is enough because the original tweet here alludes to it being a widespread reality.

There are many phases you go through when writing a novel. You fall in love with a character or idea. You want to spend time getting their story down and are excited about the process. You hit a snag where you don't know where things should go or feel you've gotten off track or don't know how to resolve something. Your research doesn't match up to your plot plan. You don't have a plot plan and someone told you that you aren't a real writer unless you do. You try to plot the novel and realize you need a math degree to figure out how to apply all the multiple story structure formulas that are out there at the same time. You tell someone a little about your idea and they ask if you've read [Insert Book Title here] or seen [Insert Movie Title here] and you feel like the story has already been done. You try to change things and when you read through your pages your character is inconsistent and your plot doesn't make sense and you haven't got a clue how to fix it. The twelve books on writing novels that you took out of the library are contradicting each other and you convince yourself it was a bad idea and try to come up with a new one.

I was terrified of reading books when I started what became my first published novel. (Suspicious Circumstances was not my first novel attempt. It's just the one that was the first I actually finished a draft of.)*

The goalposts keep moving. I've found that the moments when you actually feel any degree of accomplishment are fleeting. (Just wait until you tackle the sophomore book!)

However, there is one anchor in the whole process that sets your manuscript apart. There is one thing that you bring to the table that nobody else can bring.

Anyone can take classes and practice and learn to be a better technical writer.

Anyone can take a class and learn how to structure a story exactly to a structural guideline if they choose to.

You know what only you can do?

You're the only person who can infuse your knowledge, your experience, your insights, into a character or story, because there's only one you.

Funny how in this tribal era we strive so much to categorize ourselves. Red or blue. Black or white. Male or female or non-binary or ... (Spend five minutes talking politics on Facebook and you'll find out how many "friends" no longer want anything to do with you.)

But when it comes to your novel, the only thing you can put into it that nobody else can all comes from you.

Remember that. You're your own secret weapon. Give your characters your hurts or your hopes. Give them your dreams or disappointments. Infuse them with the life lessons that have stayed with you along the way. Give them what you wished for. Write the fantasy parent you wish you'd had or the sibling that never came along or the best friend you never found.

When you tap into your heart and your own life and extend those things to your characters you'll bring to the table something that nobody else could have written.

My rules for writing:
1. Enjoy the process. The love of writing will carry you through many discouraging days.

2. Find ways to achieve success. Oh lord, it's hard to do 1,600 words per day. I find when I'm starting a manuscript 500 words a day might be a stretch. By the end I'm clocking a few thousand a day ... I've already done the world-building and the research and established all the plot threads. Now I'm just tying them up. But setting myself a goal of 1,600 a day from day 1? Ouch. Maybe in a series if you have your characters and setting ... Still, I don't believe I've ever done that.

3. Do things your own way. Okay, sure, we can all pick up tips from others and find way to refine our process. That said, don't let anyone else tell you there's only one right way to write a novel. There isn't. I've completed a creative writing diploma. I know they can only teach you to plot because they can't teach you to write without an outline. It's the difference between following a recipe to the letter when you're cooking, or adding a pinch of this and a dash of that and cooking by feel and taste. In the end, do you care how it's done if the food tastes great? Nope.

The shortest amount of time it ever took me to draft a novel was six weeks. First draft of What Burns Within, my second published book (but not the second manuscript I finished). And six weeks is a short time.

So be kind to yourself. The very act of writing daily is a huge accomplishment. Don't let the milestones others reach daunt you. After all, whether it's 500 words or 2,000, they don't matter much in the long run if they're all crap or repeating information you've already presented. So whether you're aiming for a barf draft with gaps in it that have to be researched and written later, or whether you want to revise what you wrote the day before first and then add new words to your count, do what works for you.

4. Read. Read a lot. Read in your genre. Read outside your genre. Read far and wide. You'll pick up on technical writing details. You'll see different ways to tell a story. I've learned far more by reading a wide range of books than I have from anything else.

5. Don't quit. I have a cousin (third cousin, same age, same homeroom in high school) who is a Grammy Award-nominated songwriter and a performer in his own right. When his first CD came out he wrote in the liner notes about spending ten years eating in the dark or starving with the lights on, and how he saw a lot of people give up on their dreams along the way. He got to where he is now by sticking with it. People could have told him it wasn't practical to pursue a career in music. People could have told him he wasn't good enough. Hell, people probably told him both things, and more.

And that wouldn't have happened if he packed his bags and went home. It shamed me when he put his first CD out. Not because he looked down on anyone. Never. But because he had to leave his country and leave his family and work his backside off for over 10 years to get his deal. And he did it. All I had to do was go home and sit at my computer and invest some time in writing a novel and learning to edit it.

I finished my first manuscript and I learned all I had to lose was time, and all I had to gain was a chance to fulfill my dreams.

The very act of not quitting is a huge achievement to be proud of.

(My liberty with the chorus is When you're working on draft 9... )

* What went into the world as my first book happened after multiple rewrites that included combining a sequel with the first book to take 190,000+ words down to 120,000 words, and then paring that down below 1000,000 through revisions.

^NaNoWriMo just isn't my process. And, since most of my friends are outside publishing, I've actually had to explain that no, you don't just whip off a novel in a month and that's all it takes us. For a while it made me feel even the idea of NaNoWriMo cheapened an author's accomplishment when published, but that can be cured with education and information. I just wish they phrased the objectives a little better so people outside don't get the wrong idea. So ... not for me. But see #3 above. Don't let anyone ever tell you it isn't for you.
Posted by Sandra Ruttan at 8:21 AM