A Lover of Crime Fiction

Scott's Note: We have Rick Ollerman visiting this week, talking about an anthology he put together in honor of a guy who meant a lot and contributed a lot to the world of crime fiction. 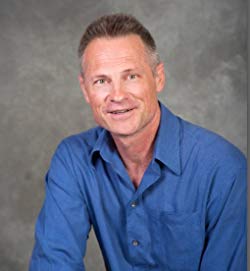 Gary Shulze was a slender man, thin really, tallish, a bit stooped, with a quiet voice but an intense cast to his face when he listened to a speaker, as though he was capturing every syllable and every phrase, not wanting to miss anything. His laid back exterior belied the honed-edge of his sharp mind which, as everyone who took the time to get past the deceptive outer shell, held a wealth of insight and critical opinion of someone who more than appreciated this world of crime fiction, he loved it.
Gary expressed this love in many ways, first of which was by living in it. He bought the Once Upon a Crime Bookstore in Minneapolis from another long-time crime fiction figure, Steve Stilwell, and ran it alongside his wife, Pat Frovarp. Their dog, Shamus, was part of the staff, as well. Gary had proposed to Pat by uncovering a set of paperback original copies of Ed McBain’s 87th Precinct novels under a glass tabletop in his living room after sliding away the newspaper from on top.
Together they hosted not only some of the most popular writers from across the country but from across the world, as well. John Sandford, William Kent Krueger, Randy Wayne White, and on and on and on were supported by Gary and Pat and the store with every new release, with some authors making Once Upon a Crime the first stop of every new tour. What’s more, they made a point of supporting newer authors, especially if one of them thought the author had talent. Not only would they host a signing but they would hand sell their books to their customers.
In the back was a curated collection of used books called the Annex. Not just a collection of “used books,” these were very good used books: first editions, signed and limited editions, paperback originals, a vast selection of Dell Mapbacks, and vintage hardcovers from the post-War days forward. This was—and is—a large room made labyrinthine room by floor to ceiling bookshelves filled with the type of books any mystery fan could lose themselves in for hours. Or days. Weeks….
In 2011, Pat and Gary were awarded the Mystery Writers of America’s Raven Award, the organization’s recognition for service to the industry outside the area of creative writing. The two of them were thrilled to get the phone call. And no one who knew them could dispute their worthiness.
Gary suffered from leukemia and had several close calls. Bone marrow transfusions kept him going. Help from friends supported him and Pat, and the store, through the tough times and still, this skinny, bearded, wraith of a man would persevere, each time returning to his calling, the bookstore and the industry of crime fiction. He also played the tuba in local bands, the most unlikely of instruments considering the physical attributes of both of them.
Gary Shulze conquered everything, until one day, he just couldn’t. Another transplant wouldn’t work and he continued to grow weaker. Gary and Pat sold the store to new owners, the Abraham family, and something that had seemed so impossible had actually come to pass.
I had done a signing at the store just after the sale. Pat was there, as was Shamus, of course. Pat assured me Gary would be there, that he wouldn’t miss it, but that he might not be able to stay long, or that he might have to spend most of the time in the back. But he didn’t. He arrived shortly before I started looking just like Gary, only thinner, more pale, weak. He sat down and didn’t have to go to the back room. Later we spoke like old times and I didn’t want it to end but we both knew when it was time to go. He was tired. We embraced and Pat and Shamus took him home. Gary left us shortly afterward.
Somebody, I thought, needed to do something to honor the memory of Gary Shulze. When no one seemed to be working on a project, it seemed clear putting together an anthology was up to me. With the help of author Jessie Chandler, I started gathering names and e-mails of people that needed to be in such a book and started firing away. The result is a good-sized multi-themed anthology called Blood Work, a collection of thirty stories featuring wonderful pieces by Reed Farrel Coleman, William Kent Krueger, Duane Swierczynski (with perhaps my favorite story of the past several years), Michael Stanley, Jen Conley, and many others. 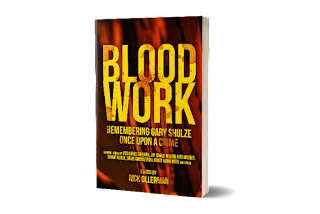 I chose three themes not only to make it easier for the authors but to make the stories themselves broader, more disparate. These were books, bookstores, and… tubas. The remarkable thing is how some of the writers used tubas in incredibly savvy ways in which to solve their crimes. Or, like our own Scott Adlerberg, who used one of the themes to write a crime story that could also be classified a horror story, that stayed true to the idea of the book. Of course the strangest things were those few weird instances where some authors attempted to work all three themes into the same story. Interesting stuff.
The overarching goal with the stories, I told everybody, is to write something that would have put that wry, crooked smile on Gary’s face. Do that, and the story is a success. The other thing that makes this collection special? That all monies go directly to a charity that Pat says saved Gary’s life on more than one occasion, the Memorial Blood Center in St. Paul, Minnesota.
I’d like to tell you that if you want to support all that is right and good in the crime fiction business, take a look at this book. If you’re a fan of different types of crime/mystery short stories, take a look. If you were ever acquainted with Gary and Pat and support what they were about, or consider supporting a worthy, life-saving institution with your book buying dollars, then please take a look.
In the end, if you’re ever able to find your own Gary Shulze and Once Upon a Crime Bookstore, treasure them, both of them, because they can leave your life before you’ll ever be ready to lose them.