The Halloween Tree by Ray Bradbury 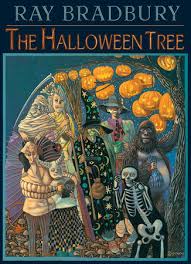 I received a surprising amount of traction from last week's review of 13 Horrors of Halloween so here's another staple of this season.

Halloween is a day to remember what we have forgotten. What have we let slip from our collective human consciousness? Fear. Being scared of things we can’t explain, things that go bump in the night. Isn’t that why we dress up as scary monsters, to help laugh at the things that used to scare the dickens out of us even if we don’t know why? I think so, and the same is true for the heroes of Ray Bradbury’s The Halloween Tree.

Eight boys dress up for Halloween in various costumes: an ape-man, a mummy, a druid with a scythe, a ghost, a witch, a beggar, a gargoyle, and a skeleton. They are beside themselves with excitement. It’s Halloween! The best day of the year, including Christmas. But their cadre is not complete. They need Pipkin, the ninth boy of their group. “Joe Pipkin was the greatest boy who ever lived.” As the eight gather on Pipkin’s doorstep, awaiting their friend to bolt out of the house and lead them, Pipkin meekly walks out. Without a costume. He tells them he’s okay but that he’ll meet them at the house on the outskirts of town. Bewildered, they go.

Once there, they see it: the Halloween Tree. “There must have been a thousand pumpkins on this tree, hung high and on every branch. A thousand smiles. A thousand grimaces. And twice-times-a-thousand glares and winks and blinks and leerings of fresh-cut eyes.” Suddenly, some thing shows up: Carapace Clavicle Moundshroud, a tall, skeletal man. He asks them why they are wearing those particular costumes and then chastises them for not even knowing what those costumes represent. The boys implore Moundshroud to tell them about the history of Halloween. At that instant, however, from a distance, the soft voice of Pipkin wafts to their ears. He’s trapped. He needs saving. They run to him but Pipkin disappears into the darkness and only the mysterious Moundshroud can help. With swirling fantastic magic, he whisks the boys away on a giant kite. They need to hunt for Pipkin in the history of Halloween. First stop: Egypt.

The bulk of the book is given to the eight boys’ flight through time and space, learning the history and folklore of the celebration we now call Halloween. It’s a phantasmagorical history lesson, really. At each stop—Egypt, pre-history, Greece, Rome, England, Europe, Mexico, etc.—the boys experience the traditions of the various regions and how each place celebrated—dreaded?—the coming winter darkness. And at each stop, Pipkin is there. But he’s not. He’s enshrouded as a mummy in Egypt, he’s a gargoyle atop Notre Dame in France, or trapped in catacombs in Mexico. He’s always just out of reach, always requiring another jump through time.

The manner in which the boys travel from one place and time to another is fascinating. Hanging onto each other’s heels, they act as the tail of a giant kite created from old circus flyers. The catch: all the animals on these flyers are alive and growl and roar. At one time, they are whisked away by leaves. Leaving Mexico, they are commanded to break a piñata and little figures fall from the piñata, each corresponding to one of their own costumes. Thus freed, the little figures lift each boy up and fly him back to Illinois.

If there’s one thing that stands out in The Halloween Tree, it’s Bradbury prose. It’s had a singsong quality to it, a brazen joyfulness in just being alive. It’s like the prose itself were a twelve-year-old boy dressed up on Halloween and running through the town. It picks you up and sweeps you back to a time and place you may never have known but, somehow, know. It’s a part of the human DNA. Take these wonderful Dickensian opening lines:


It was a small town by a small river and a small lake in a small northern part of a Midwest state. There wasn’t so much wilderness around you couldn’t see the town. But on the other hand there wasn’t so much town you couldn’t see and feel and touch and smell the wilderness. The town was full of trees. And dry grass and dead flowers now that autumn was here. And full of fences to walk on and sidewalks to skate on and a large ravine to tumble in and yell across. And the town was full of…Boys.
And it was the afternoon of Halloween.
And all the houses shut against a cool wind.
And the town full of cold sunlight.
But suddenly, the day was gone.

The day dying, the sunlight being “murdered” as Moundshroud puts it, is an important theme in this book. Halloween, throughout history, is the celebration of the ending of the season of light. The passing of October 31 equates to past generations of humans, far and wide, the beginning of the long, dark winter. As Moundshroud asks the boys, once the sun sets, what assurance do we have that it’ll rise again the next day? What if it never does? It was a real fear for our ancestors, something the boys and our modern culture have forgotten.

I touched upon a similar theme in my music review of the CD “Chiller” when I wrote about the demonic tone poems of 19th-Century music. Not too long ago, the darkness in our world was quite a bit closer than it is now, at least in the modern western world. We have science to tell us the true nature of things. We can rely on it to cast away the superstitions and fears our ancestors had. Our children say “trick or treat” but don’t really know why.

Halloween, however, is the celebration, the remembrance, of our past. It’s a cumulative organism now, an amalgamation of traditions and beliefs passed down. It’s a celebration of death as marked by the living. Toward the end of the book, Moundshroud forces the boys to make a choice to save Pipkin or not. The price they have to pay is a year of life, taken at the end of each of their respective lives. He warns them that here, when they are twelve, life seems so long. Later, however, when they’re going to want one more year, it won’t be theirs. Here, Bradbury, through Moundshroud, gives these modern boys a taste of the past, a past they know nothing about but, by learning about history and what makes life special, they make their choice.

At the end, one boy, Tom, the default leader of the eight, asks a question of Moundshroud: “…will we ever stop being afraid of nights and death?” Moundshroud has an answer. You may have another. But, on Halloween, for one day a year, we get to revel in the fear that our ancestors lived with daily. We get to remember. And, on November 1st, we get to put it all away and forget about it all over again.
Posted by Scott D. Parker at 1:00 AM

Email ThisBlogThis!Share to TwitterShare to FacebookShare to Pinterest
Labels: Halloween