One Sad Farewell and One WTF There was sad news in the publishing world – heartbreaking news for many – that Midnight Ink will only be publishing "in-process" titles through the Summer of 2019. As Terri Bishoff wrote in Facebook, "As some of you may have heard, Midnight Ink will be shutting its doors after the Spring/Summer 2019 season." J. Kingston Pierce has her complete post at The Rap Sheet.

As of now, all we have is speculation about whey Midnight Ink is closing. Bishoff also wrote, "I’m still in a little bit of shock. I didn’t know this was coming. I’m sure there will be much activity and a lot of questions in the near future. I will answer as best I can." I hope that Midnight Ink's parent, Llewellyn Worldwide, will be forthcoming with the whys and hows of their decision. Not so that we can satisfy some odd thirst, but rather so that the community can learn from the mistakes, if any, of Midnight Ink's tenure.

Meanwhile, across the pond and a few days ago, another small press began its descent down a path of ruin with one simple tweet. 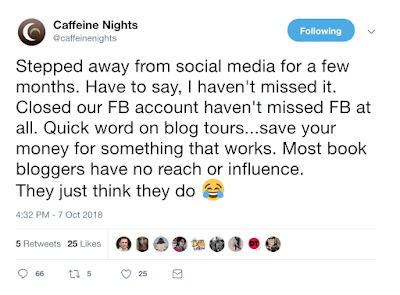 As you can imagine the book blogger community responded immediately. But you can read the responses as easily as I can post them here. You can also read Caffeine Nights' spineless backtracking in the thread.

Let's chat a bit about this tweet. And before I get into it, let me say that I review books on a blog called Unlawful Acts which I guess makes me a book blogger and I have also participated in a few blog tours.

What struck me was the first line, "Stepped away from social media for a few months." I'm sure Ashley Lister, author of "Doll House" that was published by Caffeine Nights in August 2018, was thrilled by that statement.

Let's get into the meat of the tweet, "Quick word about blog tours . . . save your money for something that works." Had the man behind the Twitter account communicated efficiently, he could have written something like, "We recommend not using blog tours as we have found that they don't help our author's sales." Then their problems would have been less.

Lastly the kicker, "Most bloggers have no reach or influence. They just think they do. 😂"

No way around this, this was mean-spirited and the LOL emoji, a final kick in the teeth.

Book bloggers are part of the ecosystem of the small press world. Our influence may be small, but I know from personal experience authors and publishers dig what we do. Well, except for Caffeine Nights. I enjoy reading and reviewing books, but most of all, I love pimping the shit out of books I love. That's what Caffeine Nights and its authors will be missing in the future, not only from me but, my guess, from a majority of book bloggers.

Any publisher of any size that doesn't see the value of book bloggers is not a publisher with their author's interests at heart. As the column space in print locations continues to dwindle, the arts are the first thing to be cut. And book bloggers (and theater bloggers, and art bloggers, etc.) are picking up the slack.

True, we don't have the reach of those major outlets, but as we know from all the rest of the world's situations, those outlets are geared at selling papers, magazines, etc - and will fill their pages with the content that sells the most copies. This is why the bestsellers get major (and repeat) coverage.

My reach - even as an MWA Raven Award recipient - is not massive, but I know for a fact that the majority of folks who visit my page regularly buy the books I recommend - books they wouldn't have known about otherwise. The only reason they come to my page is to see what books I am covering - there is no agenda on my part to raise my stats (and yet, by virtue of my honesty and integrity, they continue increase consistently for over 6 years now.)

I am happy with my contribution to the literary world and no publisher is going to tell me that book bloggers don't make a difference, don't have a reach, and don't sell books. What needs to change is the perception of book bloggers - and yes, there are good ones and bad ones (but does that not apply to paid journalists as well?)

That said, blog tours don't generally work. Most of them consist of the same content spread across multiple sites over an extended period of time. That's not how it should be done. Instead, target your bloggers with review requests, unique guest posts, and interviews for that same period. I also always tell my author friends to be wary of sites that host giveaways often. Their stats will be higher simply because folks are stopping by to win something. They are not there for the content and I can promise you, most of them are not buying the books when they don't win.

I agree that a targetted blog tour (if you will) is more appropriate. If you're writing dark and violent police procedurals, a blog tour that includes cozy book bloggers makes no sense. Though a targetted blog tour will take up a lot of time of the author trying to set it up and provide guest columns. Just be aware of that.

Is this some crusading crime fiction publishing journalism?? Are you kidding me?? Someone does this?? Lemme go'on get my #metoo stories together. Damned fine work, David Nemeth. Goddamn, I'm proud to f*ck up Wednesdays to give your brilliance greater contrast.

Me thinks they do not understand how any of this works.

All of the above. I'll not recommend anyone I know who is looking for publisher to look there.

Thanks for the heads up.

Maybe he has a Shazaam! or silver bullet mentality of getting work out there, vs. building a following one book at time, one contest at a time, one reading at a time, one signing at time, one blog post/tour at a time, etc. His marketing advice is like writing advice, i.e., makes sense sometime to some people under some circumstances. What is absurd to the point of arrogance is the summary dismissal of any one approach and an entire class of people (bloggers)critical to the writing/marketing infrastructure.

I see a lot of independent authors using social media as a sales platform. From my experience it has limited impact for that purpose. It is effective for building an author's brand and a personal following that can be converted into a virtual street team to support book launches. If enough people (other than the author) talk about a book on social media, more potential readers will take a look. It's completely a numbers game. Perhaps the problem is Caffeine Night's focus in their marketing. Maybe their message is wrong.