By Claire Booth
9 p.m. every Monday. All through high school. You could find me without fail in front of the TV, watching Murphy Brown. Those are, of course, formative years, and no fictional character impacted me like Murphy did. 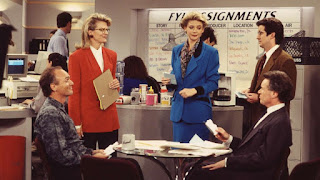 She made me want to be a reporter. She was loud and aggressive and smart and independent and successful. She even walked like she owned the world, one high-heeled foot thrown in front of the other, striding over everything in her way.
In TV and books—hell, in life—those traits usually got women chastised, ostracized, hurt. But not Murphy. Those qualities got her the story. And it made me want the same thing and know it was possible that I could have it.
So off I went off to college to study journalism. There were additional reasons I chose that career; I love to write, I'm curious to a fault, and I ask more questions than a Trivial Pursuit game. I decided early on that broadcast journalism wasn’t for me. I liked print. I liked the physical words on a page; I liked the permanence; I liked the byline. But the Murphy didn’t leave me. I wanted to do the pin-you-to-the-wall interviews, the big investigative pieces. That broadened as I went through school and started working. I wanted to do stories that helped people through tragedy or confusion, let them know about important issues, or commemorated significant events.
Murphy Brown’s 10-year run coincided with high school and college and my first few years as a reporter. My viewing got a little sporadic as time went on and I entered the working world with a crazy schedule and very little time off. I'm still insanely busy, but there will be no way I’ll miss a single episode of the new series, which premiered Thursday on CBS. It’s the same cast playing the same characters. Now they’re trying to make it in the 24-hour cable news cycle, instead of on the staid 60 Minute-ish show Murphy worked for the first time. 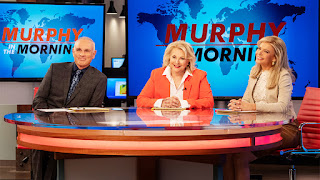 Thursday’s episode was good. It was heavy on the exposition and a few of the jokes felt a little too broad, but I think everything will settle down quickly. There are a lot of plot possibilities with Murphy’s son, now an adult, and his career in journalism. He has his own cable show on a conservative network that competes directly with Murphy’s new one on a rival channel. There's also the perennial comedic promise Murphy's inability to find a good secretary, which continues with this first new episode.
But the revived show’s greatest potential is the same one it had all those decades ago: that young people, women especially, will watch it and decide that if Murphy can be complicated, fierce, ass-kicking, and successful—so can they.