Let Your Creativity Shine: The Inspiring Message of Brad Meltzer

Sometimes, a guy is exactly who he seems to be.

I’ve enjoyed Brad Meltzer’s work as a comic book writer and as the author of adult thrillers. His blend of history and exciting, page-turning books is right up my alley. His latest novel, THE ESCAPE ARTIST, is one of my favorite books of the year and has one of the best hooks I've ever read. Here’s my review. Meltzer is also a fantastic interviewee, especially when he deep dives into the stuff he loves. I wrote about one particular interview back in 2015.

This past Thursday, I finally got to meet Meltzer when came to Houston (at Katy’s Books-a-Million) to promote his latest book, I AM NEIL ARMSTRONG. 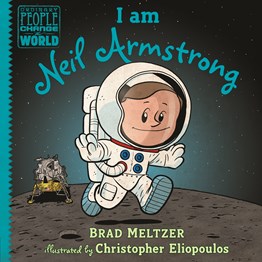 It is the latest entry in his series of children’s books featuring heroes from history from which we can learn. The genesis of the ongoing project was to remind his own children who were the real heroes. They were ordinary men and women who sought truth, justice, and to achieve something never before accomplished. Here’s one of the quotes from his website: ““These aren't the stories of famous people. This is what we're all capable of on our very best days.”

It is an admirable goal. It is also one that seems to be seeping through. There were something like eighteen kids there. Most held a copy of one of Meltzer’s books in their hands, and not just the Neil Armstrong book. A few had written him letters or drawn him pictures. All because of the stories he told in his books and were illustrated by Christopher Eliopoulos.

Speaking as a Houstonian, I’m very glad Eliopoulos captured the moment when President Kennedy declared the moon as the ultimate goal of the 1960s. You see the background? That’s Houston’s Rice Stadium. 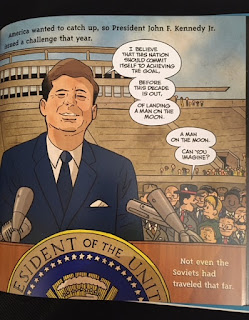 In his his 30-minute talk, Meltzer talked about the genesis of selecting Neil Armstrong. I appreciated his history talk, especially the comment about heroes. In the Depression, when all looked bleak, Superman burst onto the scene. In the months after 9/11, the first Spider-Man movie arrived. I wore my Aquaman shirt (and stood next to a dad wearing a Flash t-shirt) so we had a little of the Justice League present and accounted for.

But heroes don’t always wear capes and tights. Heroes are like Armstrong who did something no other man had ever done. Heroes are Jackie Robinson and Lucille Ball, people who also accomplished things for the first time. And Meltzer—always cognizant of the children sitting on the floor right in front of him—kept reminding them that they could write their own story, be the heroes of their own stories, and make the world a better place. In fact, he uttered a sentence so inspiring I took out my notebook and wrote it down:

“You can use your creativity to put good in the world.”

Frankly, it made me want to get home as soon as possible and work on my stories.
After the talk, we all got back in line and waited for a chance to meet the author, get him to sign anything we brought, and snap a photo with him. The kids went first, of course, and Meltzer treated each one of them like they were the only kid in the store. Actually he did that for everyone, adult and child alike.

In the meantime, I struck up a conversation with some of the folks standing in line around me. All were women, and all were avid readers. We pointed at some of the books lining the shelves and talking about them. We talked about audiobooks. We talked about ereaders like the Kindle (I was the outlier). But there was a funny moment when one of the ladies asked the deadly serious question: do you bend down the corners of pages. Like a rousing chorus, all of them said no. It was so good to stand and chat about books with avid readers. I discussed my books, but like a dunce, I didn’t have any of my business cards with me. [Shakes head] But I got to meet Meltzer, let him know how much I enjoyed his thrillers, his comics, and how glad I am that Scott Brick—my favorite audiobook reader—is the narrator of his adult books. 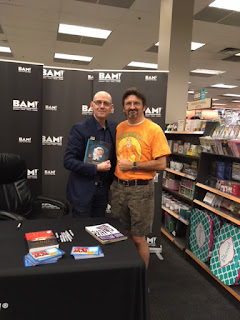 Let me circle around back to the quote I captured: “You can use your creativity to put good in the world.” Think about that today. Then follow through.

Best News of the Week
Here at the Parker house, we got great news this week. My wife, Vanessa—jewelry artist extraordinaire!—is featured in HoustonVoyage Magazine. Here’s the link with her interview and some spectacular photos of her work. Need a hint at how good her work is? Here you go. 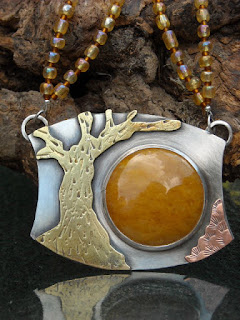