By ClaireBooth
The light is orange. It slants through the windows in the morning and turns everything the wrong color. The cloudless skies are overcast and shadows look like they've been altered by an Instagram filter. 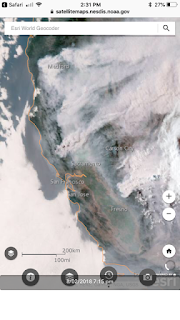 Northern California is on fire. Almost 40,000 people in the city of Redding had to be evacuated this week. Six people have died. The intense heat and dry brush spawned an extremely rare fire tornado that ripped through part of the city. To the south in the Sierra Nevada, another fire has burned nearly 81,000 acres in and around Yosemite National Park. The danger has caused officials to completely close the park to visitors. 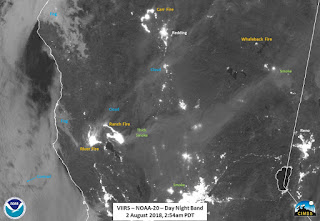 Fortunately, there aren’t any fires too close to where I live in the Central Valley. But there is a lot of smoke. It’s doing what you’d expect—producing hazy skies and spectacular sunsets. But it’s also creating more subtle conditions. Like the sunlight. It’s just off. Different. Disorienting. Like the funky shadows during a partial eclipse. They’re not how they should be, and it makes the world a little off-kilter.
After a few days of being forced to literally look at the world in a different way, something occurred to me. Isn’t that what writing fiction is all about? Seeing things in a unique way and then figuring out how to communicate that with the written word? Examining, interpreting, describing—so that readers can experience something in a way they never have before?
This realization has sparked some new creativity with my work-in-progress, which has been great. What about you? Even if your sky isn’t full of smoke, try taking a look at it differently and see what new writing you come up with. And if you’re able, send good thoughts to all the people who have fled or lost their homes in this awful California wildfire season.