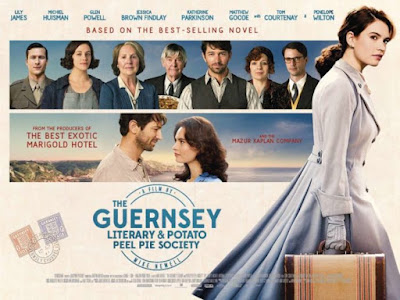 Warning: mild spoilers ahead.
I loved The Guernsey Literary and Potato Peel Pie Society. I loved that a book about the love of reading was such a success. I loved that a book with that mouthful of a title was a bestseller. So I was definitely hoping that I would love the movie, which recently came out on Netflix.
GL&PPPS takes place during and after World War II on the Isle of Guernsey in the English Channel. It was taken by the Germans during the war and that occupation continues to haunt many of the characters after the Nazis withdraw. One of them contacts Juliet Ashton, a Londoner, after finding her name and address in a secondhand book. Juliet is an author, and she eventually strikes up a pen-pal friendship and then goes to Guernsey to find out more.
Both the book and the movie share this synopsis.
From the get-go, the movie is at a disadvantage because it can’t copy the aspect of the book that gives it such a distinctive style. It’s a novel of letters. The entire book is nothing but correspondence back-and-forth between Juliet and her publisher, her love interest, and different Guernsey residents. In less deft hands, this could have fallen spectacularly flat. But authors Mary Ann Shaffer and Annie Barrows give each character such personality that by the time you’re halfway through, you can tell which character is writing a particular missive without even seeing the name. The voices are that distinctive. And trust me, that’s a very difficult thing to do.
But a movie with nothing but scenes of people writing letters? Not so enthralling. It just wouldn’t work. So the character intimacy a reader got from the book had to be removed in the movie so that there’s actually some action. So I forgive the movie for that. It couldn’t be helped (I feel this is a very generous position on my part because I’m usually a total stickler for book/movie fidelity).
I am, however, going to quibble with a few of the other choices filmmakers made. In the book, Juliet corresponds with several members of the literary society before showing up on the island. She’s been invited and they’re expecting her. This supports why she feels so at home when she gets there. The movie inexplicably turns her into an uninvited guest, who shows up inconsiderately with no warning and no prior letters to anyone but the initial letter writer. This shades her character in a completely different way from how she was drawn in the book.
The bad changes continue with the movie Juliet’s decision to accept a marriage proposal immediately. In the book, she says that she needs time to think about it. This change is ridiculous in light of an added movie scene, where she argues that someone she wrote about is an early feminist. That scene would have been well supported by leaving the book’s plot alone and having Juliet take a wait-and-see approach to her own possible marriage. 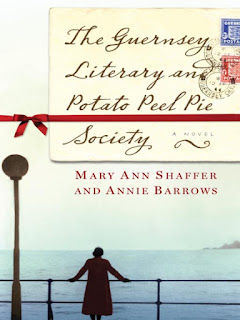 Now, I’m not a total book-to-film curmudgeon. There were things I did like about the movie. Matthew Goode is certainly one of them. The whole cast, actually, is fantastic. Lily James gets rid of the blond locks she had in this summer’s Mamma Mia sequel and plays Juliet with appropriate writerly (and brunette) aplomb. Goode, who was on Downton Abbey’s later seasons, is joined from that show by Penelope Wilton and Jessica Brown Findlay. Michiel Huisman (Game of Thrones) is Dawsey Adams, the finder of the secondhand book who sets the whole plot in motion. The locations are gorgeous and the historical time period is fascinating. And to be honest, it was nice to watch something that was, well, nice. I enjoyed it. Anything that's about the joy of the written word is something to celebrate, as far as I’m concerned. And if it makes you want to read the book, all the better.
Posted by Claire Booth at 3:00 AM